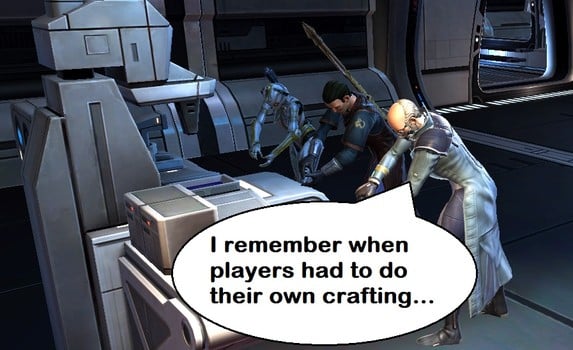 Eric Musco just posted a forum update about the crafting changes players can expect with Patch 4.1.

With the release of 4.0 we made a pass at focusing and streamlining Crew Skills and with 4.1 we are continuing this effort. We want crafting to remain an important alternative to Mission and Operation gear. With the release of 4.1 we are releasing an alternative to the KotFE gear. This new tier of gear will be the best craftable gear that does not require exotic crafting materials, and to support this tier, we are introducing a new grade of crafting materials and missions. With this new change, we want Crafting to remain an important alternative means to collecting the most powerful gear in the galaxy – whether you’re looking to gain an edge in combat, or turning a tidy profit on the Galactic Trade Network.
There are a few terms that we will be using throughout these posts, here are the terms that you will be seeing and what their meaning is:

General Crafting Changes
Here’s a look at some of the broader, system-wide changes we will be implementing with 4.1. We will be going into greater detail for each Crew Skill and Mission in the following sections.

Mission Crew Skill changes
With the release of 4.0 we unlocked all Crew Skill Missions. While this made it easier for players to run the specific Missions they wanted, it also exposed how redundant and unorganized these Missions were. With 4.1 we made a pass to both simplify and organize these Missions so that you have less Missions, but they are more focused on the things you really need.
For reference in this section, order of result from best to worst:

Thank you all for taking the time to read through all of the changes we have planned for Game Update 4.1. As always, these changes are subject to change and you should review the 4.1 Patch Notes for the final changes.