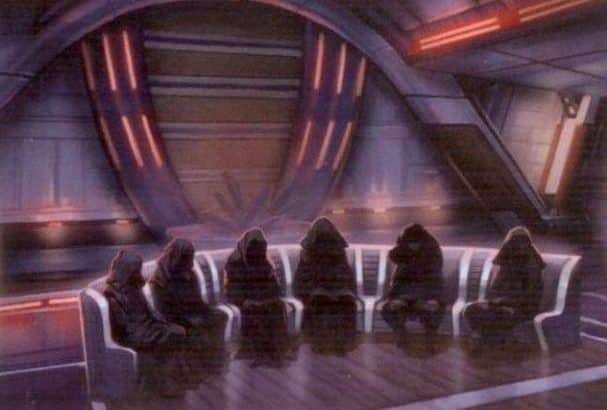 Battle meditation was a manifestation of the Force which instilled in the meditator’s allies a greater morale in battle and reduced the enemy’s will to fight. Using the Force, one could coordinate entire fleets of ships, allowing them to perform at maximum efficiency, acting as one to counter every enemy move quickly and effectively. A refinement of battle meditation was known as Force Meld.

This Force-power was first made famous by the ancient Jedi Odan-Urr, Arca Jeth and Nomi Sunrider. It was also practiced by Bastila Shan, as well as later Jedi Council members Yarael Poof and Oppo Rancisis, who used it in both the Stark Hyperspace War and the Clone Wars.

Battle Meditation was not merely province of the light side; Emperor Palpatine and Grand Admiral Nial Declann had also mastered the technique, and used it to great effect in the Battle of Endor. With his death, the shock of the sudden removal of this influence threw the fleet into chaos and allowed the Rebel fleet to defeat them.

Another practitioner was Joruus C’baoth, the former guardian of the Emperor’s treasure planet, when recruited by Grand Admiral Thrawn. Presumably, this meant that Jorus C’baoth could use battle meditation as well, and it was known that Jorus performed Force meld at least four times in his life.

In Knights of the Old Republic, battle meditation is exclusive to Bastila Shan, and is actually a plot element rather then an actual usable ability. This is explained in the game by saying that battle meditation can only be used when the user is in deep concentration, thus it cannot be used while the character is in the heat of battle.

In Star Wars: Knights of the Old Republic II: The Sith Lords, battle meditation is a usable ability. Using the power grants a bonus to attack rolls, damage, Will saves, and increased Vitality Point Regeneration to the player’s entire party. At higher levels, it can also impair enemies.

History
This Force power was first made famous by the ancient Jedi Masters Odan-Urr, Arca Jeth, and Nomi Sunrider. Odan-Urr used it during the Unification Wars, while Arca Jeth used it with great success during the Beast Wars of Onderon. Being naturally adept, Nomi Sunrider applied Battle meditation in nearly every conflict she participated in, such as the Freedon Nadd Uprising, the Battle of Koros Major, and the Great Sith War. It was also practiced by Bastila Shan (who perhaps is the only one to ever truly master this power) during the Jedi Civil War and the Battle of Rakata Prime, with impressive results.

The Dark Side
Battle meditation was not merely a province of the light side; powerful dark side users could twist the wills of their commanded armies not through subtle influence, but with total domination.

When Nomi Sunrider asked of her master if those who use the dark side can command Battle meditation, Odan-Urr replied that indeed they could, but it was very rare. Emperor Palpatine and Grand Admiral Nial Declann had also mastered this technique, and used it to great effect in the Battle of Endor. Following Palpatine’s death, the shock of the sudden removal of this influence threw the Imperial Navy into chaos and allowed the Rebel fleet to defeat them. One thousand years earlier, Lord Kaan also used battle meditation during the New Sith Wars. Joruus C’baoth, the clone guardian of Mount Tantiss on Wayland, increased the victory percentage of Grand Admiral Thrawn’s armies by forty percent via dark Battle meditation.

When Darth Caedus ascended to Dark Lord of the Sith, he soon found out that within his mind he could coordinate and direct battle into whatever outcome he so desired. He would use a meditation chair onboard his personal star destroyer to amplify his powers. It should be noted that Caedus’s early uses of the art were poor, as his first attempts only resulted in him being able to see the battle unfolding in his mind, not being able to directly influence it. When he tried to dominate the wills of his subordinates via the Force he found that they were not so easily subjugated, and reacted with hostility to his psychic intrusion. The more Caedus practiced however, the stronger his proficiency became.

It should be noted that while his clone showed a proficiency in dark Battle meditation, it is possible that Jorus C’baoth could use battle meditation as well, since it was known that Jorus performed Force Meld at least eight times in his life.

Also of note, while Krath leader Satal Keto was able to dominate the minds and actions of his fleet of Chaos fighters, this was acheived through the arts of Sith magic. Whether Battle meditation was a power that could be harnessed through Sith sorcery is presently unknown.

One thought to “How Stuff Works: Battle meditation”