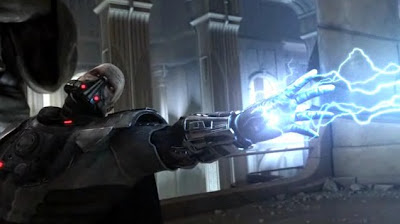 ComputerAndVideoGames, the digital arm of PC Gamer magazine, has posted a message noting that James Ohlen told them that the endgame content in Star Wars: The Old Republic will be a combination of classic MMO systems and something new. Here’s their article:

Bioware has revealed that end game content in Star Wars: The Old Republic will mix the classic MMO system with “something brand new””””””””””””.

The ‘endgame’ content offers players incentives to stay in the game once they’ve reached maximum level.

“We’re looking at classic [endgame] systems, but we’re also doing something brand new that hasn’t been done in an MMO before. So we’re going to mix those two together.”

Olhen then got hushed by the game’s product manager, but added that Bioware was keen for players to continue questing after hitting maximum.

As I understand it the magazine has the complete interview, but since I don’t have access to that I can’t tell you anything more than I’ve already quoted above.

Even so, sounds intriguing. I wonder what they’ve got cooked up. Though I rarely make it to the endgame (in fact, has only happened in one MMO to date).

[link] to news item at ComputerAndVideoGames.