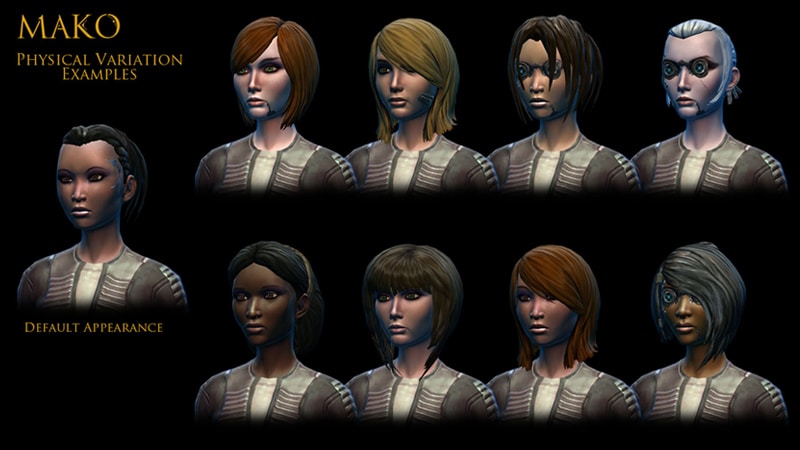 BioWare has brought us the latest Companions 101 installment and this time, it’s all about Mako! I’m a fan of the bounty hunter myself so I’ve been looking forward to this one. If you want to learn more about Mako and her backstory, then you will enjoy this Companions 101. Just remember, there are spoilers in these!

Despite her energetic and upbeat attitude, Mako’s life hasn’t always been easy. She grew up on the streets of Nar Shaddaa without any idea who her real family was or how she received her cybernetic implants. Because of these implants, Mako has a constant connection to the Galactic HoloNet. At a very young age, she showed great skill in computers – particularly slicing. After finding out that the Red Light Orphanage she belonged to was going to sell her, Mako used her skills to crash their accounts and escaped to the streets. She had to become street-smart quickly to survive and it wasn’t long before she was moving up the ranks in some of the moon’s most infamous slicer gangs.

An old bounty hunter named Braden took Mako under his wing after a job she was working on went wrong. He became a father figure and mentor to Mako, teaching her the ins and outs of bounty hunter culture. Mako became obsessed with the Great Hunt, a Mandalorian tournament pitting the galaxy’s greatest bounty hunters against each other, and its former champions. Mako meets the Bounty Hunter on Hutta, when the Bounty Hunter joined Braden’s team to enter the Great Hunt. 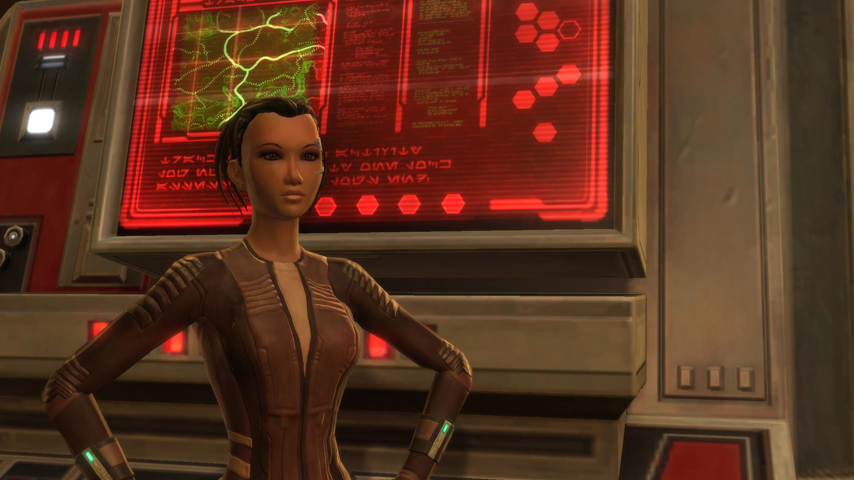 “Hope you’re as good as the old man says!”

“The years Mako spent under Braden’s wing have definitely rubbed off on her. The life of a bounty hunter is practically the only life she knows, so keeping herself immersed in that life provides her with a great deal of comfort in Braden’s absence.

But it’s not just about feeling secure. With Mako, here’s someone whose parents apparently fitted her with a rare cybernetic HoloNet uplink and then left her to become an orphan. As you might expect, Mako has a freighter-load of questions about all that. Being a resourceful figure with contacts in the Empire and the underworld, the Bounty Hunter is well suited to help her get at the answers she so desperately needs.”

After her experiences on Nar Shaddaa, Mako sees herself as a self-reliant, tough woman, which is mostly true. She is extremely professional, loves challenges, and is always looking for ways to improve her skills. However, there is a side of her that is a bit naïve, especially when it comes to social situations. By constantly being connected to the knowledge of the HoloNet, she sometimes is overconfident in dangerous situations.

Mako’s implants and higher learning abilities would make her a valuable asset on any team. But as mentioned before, she chooses to stay with the Bounty Hunter even after avenging Braden’s death. She could probably make more credits using her computer skills for the Empire or a gang, but she chooses to run with the Bounty Hunter. I asked Sean, what is it about the Great Hunt culture that fascinates Mako?

“The Great Hunt is like the Monaco Grand Prix of bounty hunting, and here’s young Mako experiencing all of it as a member of the pit crew. She’s right there in the center of the excitement, learning for the first time what it means to be a part of something greater than herself–to be part of a family.

With her particular skills, in an event where you have to know everything you can about your marks and sometimes have to slip into some tightly-secured places, Mako is a prized member of that pit crew family. Who wouldn’t want to feel wanted like that?”

Having a team that depends on her helps Mako deal with her grief over Braden as well as motivates her to dig deeper into her past and find out who she is and where she comes from. It’s not all about credits to Mako. She has a soft spot for the underdog and isn’t a fan of those who take advantage of hard workers. 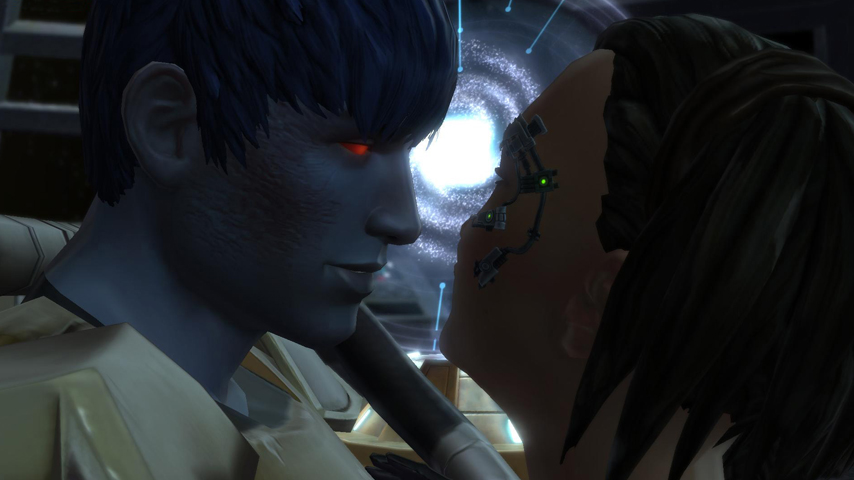 “I love you, you know… You probably guessed that already.”

While at times flirtatious, Mako doesn’t want to risk the success of a job because of personal feelings. She prefers to keep work and play separate. However, with some smooth talking and the right amount of Underworld Goods and Technology gifts, Mako can be persuaded to make an exception for the Bounty Hunter. So what’s Mako’s idea of the perfect romantic adventure? Sean gives us some details:

“The first order of business for Mako would be to get the crew off the Mantis. No easy task by any means. Then she’d clue the Bounty Hunter in on a Blacklist entry too juicy to pass up: a high-level bounty hiding out on Nar Shaddaa.

The trail of their prey would send the pair from the seediest depths of the underworld to the loftiest heights of corporate excess, racing against time and other bounty hunters eager to claim the bounty, with Mako pointing out all the significant landmarks of her youth all along the way. Finally, they would reach their target: an unoccupied suite atop Nar Shaddaa’s tallest tower, where a lavish dinner and chilled drinks curiously await them. Mako would then reveal that she posted the bounty herself—her way of providing them an adventure to remember.

Enjoying the spectacular view, the two would hatch a plan to evade all the other bounty hunters, who would be converging on their location any moment, and none too pleased to learn the truth….”

The Bounty Hunter acquires quite a diverse crew throughout their travels. With so many personalities crammed together on one ship, friendships and conflicts are bound to arise. Besides the Bounty Hunter, I asked Sean which member of the crew Mako prefers to spend her time with?

“Mako’s definitely someone who likes being part of a crew, and she understands that everyone brings their own strengths–and their own baggage, too. For example, she finds 2V-R8 to be a super huge help on the Mantis, but she could do without the relentless chatter. Similar story with Blizz. Having him around is like dealing with a hyper sibling: you care about ‘em, but sometimes…. She gets along with Gault as best she can, but she’s had more than her share of self-important grifters from her days on Nar Shaddaa.

With his warrior’s spirit and code of honor, Mako looks to Torian as someone she can trust, which counts for a lot when you’re running with a crew. They definitely become friends along the way-and if the Bounty Hunter isn’t looking for romance, they just might become more than friends.”

The Many Faces of Mako

Companions have always been an important aspect to BioWare games and it is no different with The Old Republic. However, since Star Wars™: The Old Republic™ is an MMO, the developers felt like a feature had to be added so that the player felt like there was uniqueness to their Companions. This is where Companion Customizations come into play. These customizations are purely aesthetic, leaving your choices in game to influence your Companion’s personality, but it is a great feature to further shape your own Star Wars™ saga.

Mako has eight standard customizations, including a special Rakghoul customization from our Rakghoul Pandemic event. Check out the screenshots below!

Show your love for this spunky splicer with some of these Mako wallpapers! 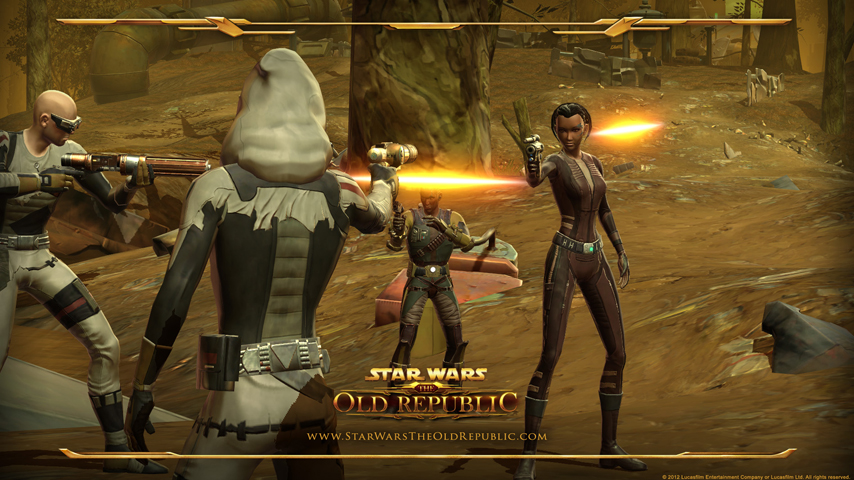 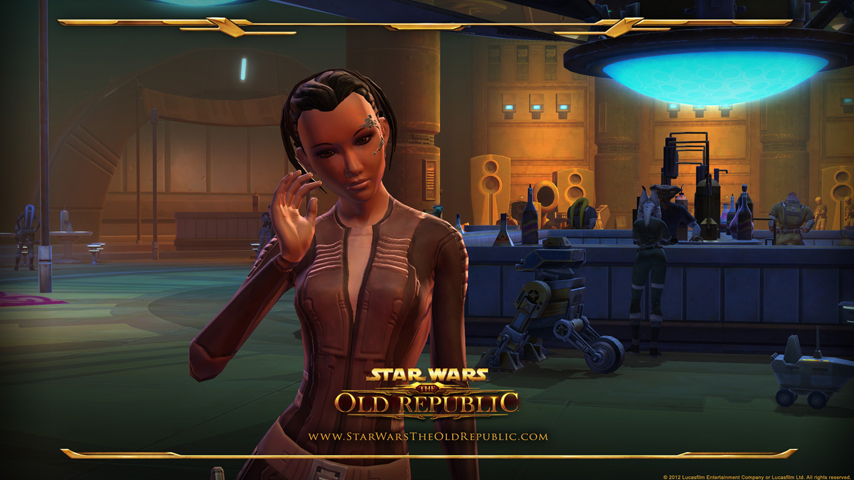 To learn more about Mako including statistics, background information, and her gift preferences, check out the Companions page on the HoloNet!