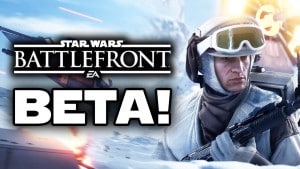 This week the Star Wars Battlefront beta made it to the scene and players are experiencing and analyzing it, as well as offering their first impressions. If you’ve tried it already, we want to know what you think in the comments. So, Star Wars Battlefront is available on the PlayStation 4, the PC, and the XBox One. We also want to know what platform you’re playing it on. EA is expecting to sell 9-10 million copies of this game. Yes, that’s 9-10 MILLION!

When it comes to first impressions, we think one write-up from Polygon staff is pretty interesting. They had the chance to play the beta on each of the three platforms and took time to write up some initial thoughts and opinions.

It’s well worth the entire read because you’ll see why he says the things he says but the closing statement sums it all up well:

I went into this beta with a part of my brain expecting a Star Wars-themed skin for Battlefield 4. If you come away from these few paragraphs with one thing, let it be this: It really, truly isn’t that at all.

Playing the new Battlefront, you really get the sense that rather than simply repackaging modern Battlefield, DICE opted instead to reimagine what the original Battlefront andBattlefront II would feel like if they were created today. Which, for my money, is about a zillion times more interesting.

Charlie Hall, Nick Robinson and Dave Tach all chime in to share their feelings on the game and to explain why it feels like a PS2 game, “in the best way possible”. It was actually Robinson who we credit this quote to. He explains:

Now, to be 100 percent clear, I don’t mean that as a pejorative. And I’m certainly not talking about the visuals.

What am I talking about, specifically? Well, for starters: there are no iron sights in Star Wars Battlefront. Yes, you can squeeze the left trigger to look down your scope, but as one of the load screen tooltips helpfully points out, this feature (mechanically speaking) doesn’t do anything. Sure, zooming in with the left trigger might give you a better view of your enemies, but it in no way affects the accuracy of your weapons. This is huge.”

If you’ve played the beta, would you agree with their assessment?