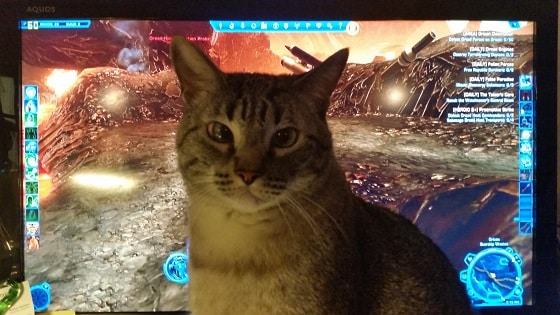 SWTOR Game update 3.2 came with an unfortunate bug yesterday, letting players have access to the Ziost operation boss via what apparently is an exploit. I must admid that this surprised me, as I have been using the “exploit” my self. I personally thought it was just another new secret area. The whole point of hunting for datacrons, especially Makeb, is to train us to be good at accessing areas that are not genearally easily accessed – but apparently I was wrong.

Here is the news from Eric:

One of the things we tried to be clear about with the Ravagers is that we are serious about handling exploits. With that exploit, the Ravagers we were open about our process and the action we were taking. For this issue with Ziost, we are going to do the same.
If a player is bypassing the environment to access an area they should not be able to, and then killing a boss to get loot they should also not have access to, we absolutely consider this an exploit. We are investigating this issue right now, and will be actioning any player who participates, or has participated, in this exploit.

If you ever hear of or find something that can be exploited, do not test it yourself. Please notify us immediately and privately. Some of you brought this issue to our attention on PTS and we thank you for that. We closed that opening, but it seems that there is another method of getting into the area.

We would also like to thank those of you who did not exploit and who have brought this to our attention. Our goal will always be to create a safe and fair environment for our players.
Thanks.

EDIT: Actions have now been taken:

As I mentioned earlier this morning, we very quickly isolated what the exploit entailed and began an investigation into players who have participated. As of now, we have identified those unique accounts which have gone into the blocked off area of Ziost, and killed one of the two bosses present. For each of these players, they will receive a minimum of the following action:

We will continue to monitor the blocked off area of Ziost throughout Monday, May the 4th, which is when it opens officially. Any player who is found to participate in this exploit beyond today’s notice will likely receive more aggressive action. Thank you all for bringing this to our attention.