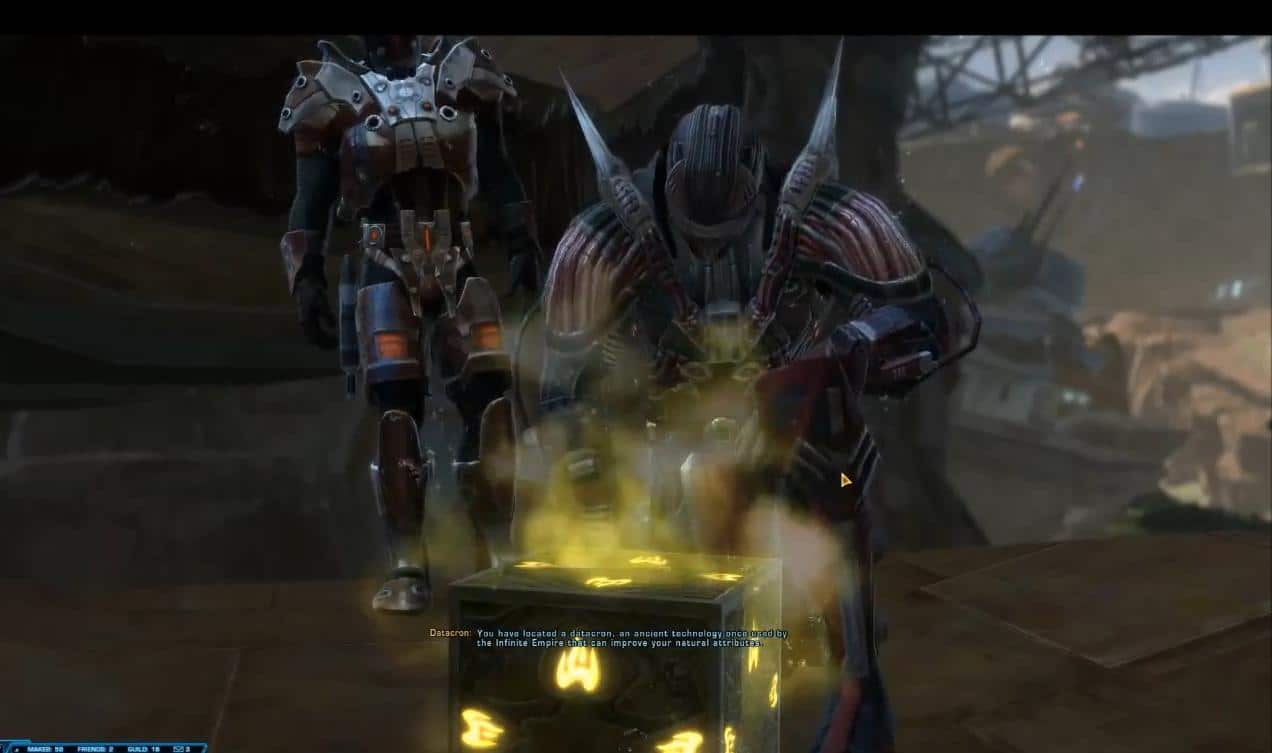 In Star Wars: The Old Republic, Makeb is a Hutt controlled planet that is growing in power due to the large number of Hutt that are accumulating there. In addition to the Hutt, there are two ancient Datacrons on the surface of the planet and anyone that finds them will be empowered with increased +10 Presence and +10 Endurance. For this reason, the Republic and the Empire are both targeting the planet of Makeb.

Datacrons are special collectibles that you’ll find on every planet but they are usually very difficult to find. This Datacron guide will help you find them on the planet Makeb.

To reach the Datacron and receive your +10 Presence, you’ll need to mount your speeder and head towards the Perekta Mesa. Once you get there, go towards the south and look for a line of rocks and start following them. These will lead you to a very large open area. Once you enter the open space, go straight until you see a very large rock sitting by itself.

Just behind the rock is a secret entrance to a cave, you’ll need to go through the cave until you see another small entrance. It will be on the right-hand side and it leads to another large open space. If you are still on your speeder, you’ll need to demount at this point. After jumping through the rock entrance to the flat rocks below, go down the path but stay as close as you can to the rock wall on your right. Continue following the path until you reach the end and jump down to the rocks just below you. Here, you’ll see three large pieces of pipe sticking out of the rock wall.

At this point, you’ll need to jump onto the largest pipe at an angle to keep from falling off. From the first pipe, jump over the green pipe and onto the surface. Then jump to land on the blue platform while hitting the narrow blue pipe in-between. Walk to the end and jump down onto the platform below, (there is a brown pipe just below the cliff that you can jump onto if needed to make it to the platform) then jump across a small gap and you’ll see the Datacron. All you have to do now is collect your +10 Presence.

To find the Datacron with the +10 Endurance, you’ll need to take the speeder to Frinn Mesa to begin your journey. Once there, demount and jump down between two rocks to reach a platform with an elevator, which will take you to the next point. After exiting the elevator, you’ll need to turn towards your left and start climbing the first beam you see.

When you get to the top, turn left and move straight ahead. Jump onto the metal part and follow the arrows to the end. Now, follow the rocks around as far as you can. You’ll encounter a few mobs on the rocks that you can choose to ignore by staying to the right when you see the first one and going to the edge of rocks to stay away from the second one. If you do decide to fight, keep your back to wall to keep from falling off.

Maneuvering Down the Rocks

When you reach the end of the rock path you’ll need to jump off the cliff and head toward the other side of the platform. (Remember, it’s also vital that you heal yourself between each jump or the next one will kill you.) Jump down onto the closest rock and then down to the next one.

On the second ledge, turn left to go down the path and then turn towards your right and jump onto the closest rock. Turn around and then jump down one more rock, turn again and jump down to the next rock. If you jump when the mob is not looking, you can avoid him but if he sees you, you will have to fight. Go in the opposite direction of the mob and make your way to the corner where you’ll see a round platform.

Mount your speeder, jump onto the platform and then go to the rocks on the opposite side. Once on the other side, turn left to go down the path. When you see the mob, you can speed past him and keep going. If you engage him, it will spawn another one. When you get to the end of the path, wait for the platform to move up closer to you and jump on it. When the platform moves above the balcony, jump onto it.

Run the beam to the second balcony and demount the speeder. Walk to the end of the beam on the right side and line up to jump down to the beam below. When you’re on the beam, go forward and then left at the first section. Jump off onto the rocks below and go left running alongside the rocks. Make one short jump onto another rock and bear left to go down the side of the cliff.

Making Your Way Down the Cliff

Making your way down the cliff is not an easy task. You can’t jump here. Instead, you need to very slowly step towards your left as you go down the side. As you are slowly falling down the side of the mountain, you can control it more if you press the left key button and then press the down key in sequence.

When you get down to the big rock platform, line yourself up and jump onto the beam below. Walk to the end of the beam, hop on your speeder and take a right. When you get to the end, take a left, drop down to the ledge just below the beams, make your way to the platform and demount. Here, you’ll find the Datacron and receive your +10 Endurance