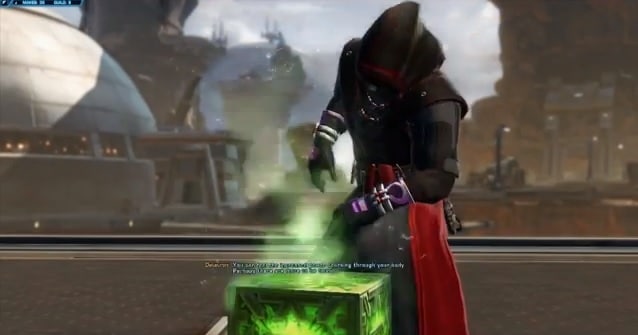 Here is a little tale of a SWTOR Player trying to get the endurance Datacon on Mekeb:

Actually it’s a nightmare first time but once you know the way it’s easy, you just have to be careful and not rush it. First time I failed 10 times or so, now for the alts I get it on first or second try and it’s actually fun to do. Best thing is when you do it in group and watch the others fall.

If you haven’t found them all yet, we have a comprehensive datacron list here.

I suggest getting most of them as you level, just because I find it easier, personally. However, there are a few that you’ll have to make a trip back during the planet’s bonus series or later. Nar Shaddaa has some in the bonus area and can be a pain to get at during your first trip there, and one on Hoth requires punching a high level robot. Also, one in Alderaan is in a bonus area heroic area (so level 40ish, when you’re usually under level 30 to do Alderaan’s main story).

But for the most part, I suggest getting them as you go. It feels like it takes less time, and the XP is usually on par for the planet’s level, so it always feels more worthwhile to me then. But some people don’t like the distraction and go back around after they’re done leveling. And some people don’t get ’em at all.

On Korriban, though, there’s no excuse to not get them. It is the easiest planet ever for datacrons. I love it.

So, in short: Play how you like! If you like getting them, go for it! If they piss you off, take a break and come back to that planet later! Etc. Just have fun. 🙂