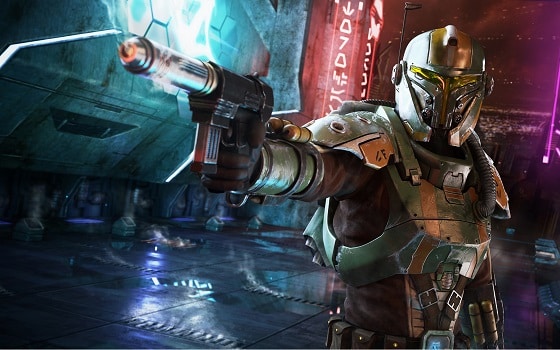 BioWare posted a Developer Blog named “Blood and Credits” What you are about to read is an excerpt from the official Star Wars™: The Old Republic™ Encyclopedia. It will describe an overview of all 3 Acts of the Bounty Hunter Class story. Although we try to avoid them wherever possible, this excerpt will contain spoilers. Please read at your own risk…

Prologue
A skilled bounty hunter sets out to enter the Great Hunt, a legendary competition in which the galaxy’s most accomplished warriors seek fame and glory by hunting down infamous, elusive, and supremely dangerous targets. But when the bounty hunter’s mentor, Braden, is murdered by a cruel Mandalorian named Tarro Blood, the freelancer scrambles to find another way into the competition. The bounty hunter manages to secure the sponsorship of the crime lord Nem’ro the Hutt and heads to Dromund Kaas to fight for the Great Hunt’s final open slot. After taking part in a winner-takes-all Grand Melee, the bounty hunter finally earns the right to join the Great Hunt.

Chapter One: Blood and Credits
The bounty hunter begins the Great Hunt with a bang by stealing a powerful starship from which no target can hope to hide. The bounty hunter’s Great Hunt contact Crysta Markon provides the bounty list: a brilliant Imperial admiral directing an invasion, a shadowy assassin who has never been seen by either targets or clients, the galaxy’s slipperiest con man, and an untouchable noble respected by friends and enemies alike. But with each target, the bounty hunter must also be wary of Great Hunt rivals who are after exactly the same bounty.

While the bounty hunter forges a path to victory, so does the tarnished Mandalorian Tarro Blood. The two rivals are pitted against one another in the Great Hunt’s final bounty: Jedi Master Kellian Jarro, known for destroying an entire Mandalorian clan. In a destructive race to the target, the bounty hunter tears a path of devastation through the Jedi’s starship, repaying Tarro Blood’s treachery with an ignoble death, and killing Master Jarro. Declared the new Grand Champion of the Great Hunt, the bounty hunter gets a visit from Mandalore, the leader of all Mandalorian clans. The hunter must now weigh the honor and responsibility of joining the Mandalorians against a life of personal freedom.

Chapter Two: Price of Fame
Grand Champion of the Great Hunt is more than just a title, as the bounty hunter quickly learns. A whole new life of opportunity is revealed when the former Grand Champions welcome the bounty hunter into their ranks. They reveal the existence of the Blacklist, a collection of high-value bounties made available to proven talent such as themselves. As a welcoming present into their exclusive community, the bounty hunter is presented with two Blacklist targets: a disgraced Mandalorian clan leader and a voracious pirate lord. Neutralizing these incredibly difficult targets further increases the bounty hunter’s fame, glory, and asking price.

But the path leading to this newfound honor brings unexpected consequences. The Republic’s Strategic Information Service and the Jedi Order want justice for the death of Master Jarro during the Great Hunt, and the bounty hunter narrowly avoids an elaborate sting operation. Republic agents continue to hound the bounty hunter and in the process they slaughter the Grand Champion’s newfound allies. Worse still, the unknown Jedi responsible for the operation somehow convinces the Supreme Chancellor of the Republic to declare the bounty hunter a threat to all civilized life. Branded a galactic menace, the bounty hunter gains a notorious new title: public enemy number one.

Chapter Three: Business Gets Personal
Now a ripe target for every two-credit chump with a blaster, the bounty hunter is intrigued when the utterly ruthless Darth Tormen approaches with a proposition. In return for collecting a series of bounties that advance the Sith Lord’s interests, Tormen offers lucrative payment and assists in hunting the Jedi who branded the bounty hunter public enemy number one – a man Tormen identifies as Jedi Master Jun Seros. Eager for payback, the bounty hunter agrees to this alliance of convenience and begins working down the bounty list: an infamous Republic privateer, a charismatic Republic general on a diplomatic mission, and the leaders of an anti-Imperial rebellion.