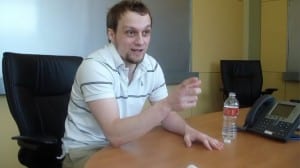 Darth Hater interviewed Gabe Amatangelo on PvP & Operations and as usual, he had some interesting things to say. It is well worth the read if you haven’t already. Thanks Darth Hater!

Why did you choose a quasi-Domination objective for the new Warzone?

Gabe Amatangelo: Huttball comes at a close second, but overall Domination is the most popular one. Obviously we’re really proud and excited about Huttball being a close second because it is a new take on an existing type of mode. How does Novare Coast differ? I mean, how does Domination differ from game to game? Level design has something to do with it. I’m sure people that are on the PTS already know the specifics of mechanics. It is a majority one, so you have to have two out of three to at least start accruing some points or doing some damage to the enemy base. Also, it is sort of a tug of war, channel-type objective control. You channel in, and you’re able to build some control-like points before you actually control the objective. Your progress is saved going back and forth between enemies, or coming back to resume after clearing some enemies out. It is definitely different from Alderaan. Of course I can’t say that three-point domination is different from anything else in the genre ever, but it is different from Alderaan, and it has its own sort of unique level design layer as well.

Can you explain what your vision is for the rated Warzone pre-season?

The first season we’re doing in 1.2 is pre-season because we don’t have the cross-server queuing in yet. Cross-server queuing is definitely important for an Elo-based type of rating system for matching people up with people of similar rating skill on a frequent basis. This first preseason introduces the competitive measure because we think that is an important aspect to complete PvP experience, but also to collect data and refine the system before getting into the official season one.

Is the regular season going to have a fixed length every time and then it resets?

A lot of factors are going to come into play with that… in the pre-season, we’ll collect data, and that will be a factor. Also the development cycle and updates schedules will become a factor for it. But generally speaking, when we introduce a new tier of gear, our target is to introduce a new season within PvP.

Can you explain how the system behind the team Elo rating and individual Elo rating works for the upcoming season?

Your group rating is affected any time you queue with a group. And anytime you queue solo, that’s going to affect your solo rating. There are two separate ratings altogether.