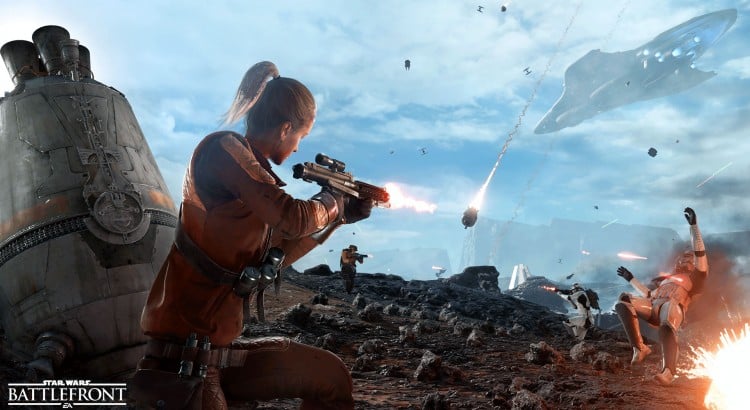 EA has had a “review event” for Star Wars: Battlefront. During this there were outlets invited to play the game before the launch on servers designed to simulate live environments. The review for impressions of the gameplay from the event that was held lands on the day of the games launch. Neither one of these things are too much out of the ordinary.

Review events aren’t actually the best things ever, however, for a game that is nearly entirely based on multiplayer, we understand playing it the way it should be played, with fully populated servers and all. However the problem is that the embargo coming after the event doesn’t make any sense. Why, you may ask? Because of EA Access.

Anybody who signs up for EA Access has the ability to play the entire game of Star Wars:  Battlefront for 10 hours. You can go through all ten of these hours in one day, or you can take a week to get through them all. However, the point it, anyone has access to the game right now if they sign up for EA Access.

However, the reviewers who did attend this event are under embargo to share their thoughts and opinions about the game up until launch day. A game that anyone that has a few extra bucks lying around can play it right now.

SWTORStrategies did not attend the event and there are also a few other major sites that didn’t show up as well. The reasons are due to the previous conditions. This will end up making the review coverage messed up for Battlefront, because this is what will happen.

Different sites can review Battlefront whenever they want to, if they have EA Access. You could say that ten hours with the game is not enough time to give an accurate review, and you could be right, but there are many sites that will not see it that way.

You could ask, are they wrong? At a review event, we would be impressed if each attendee received much more than 10 total hours of play time. It could be possible that people are locked into a room while they put in 40 hours into the game at the event, but it wouldn’t be surprising if it was less than that. However, they will still be writing “official” scored reviews that are based on their experience.

Now there will be a few classes of reviews that will be released. You will see the early ones, either impressions or full-on reviews that run before the game is released. There will also be “official” reviews from the review event attendees that launch on the release day of the game. Lastly, there will be late reviews, and they will be from those who are either spreading out their EA Access time, or they didn’t agree to the review event rules and now they are reviewing the game with a retail copy of the game.

The answer to this is quite simple. Whoever attended the review event will be able to post their impressions and opinions of the game as soon as EA Access launched the early availability for the game. Restricting an official review when the game has already been out for four or five days is just plain stupid, and it’s only going to create splintered reviews of the game.

We aren’t sure why all of this is happening with Battlefront. It was very well-received in the extensive beta, and EA clearly has confidence in it to give players the ability to play the whole game in EA Access.