Welcome back to another Intergalactic Intel! I hope everyone is enjoying early access as we begin to prepare for release! We’re working on getting Galactic transmission up, apparently there were some youtube no-nos we crossed we’ll have the audio at least up by the end of the day. Today we’re talking about crafting.

Now as a long time MMO-Player, I loathe crafting. Various things piss me off, mostly the collecting of items that are needed for crafting, but as a hard core raider not going for the bonuses that crafting gave you would be gimping myself to the point of uselessness. (Not really but min-maxing is important!)

With The Old Republic, crafting has taken a turn for the better. Usually we as the player go out into the world and search for crafting materials. But in SWTOR, we as the players can send our companions out to go collect materials and craft for us. Our companions can even continue when we’re not even logged in.

While this is a step in the right direction, there are still some changes that need to be fixed. The biggest issue I have at the moment is the reverse engineering aspect of the crafting system. I do like how you break down objects and learn how to create new ones, but I do not like the randomness of learning new patterns. A believe you should have to reverse engineer an “x” amount of items to learn a new schematic as opposed to just randomly on chance. 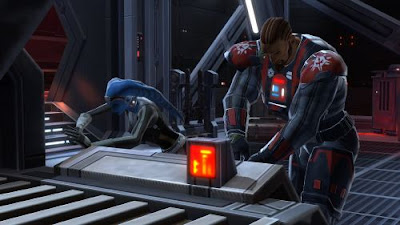 Another aspect that needs to change is the time it takes to send a companion on a mission quest. While gathering missions usually take 1-3 minutes at most, a diplomacy or treasure hunting can take 5-6 minutes depending on the item you wish to obtain. This wouldn’t be a problem if you could collect various items like biochemical bonding agents in the actual world as opposed to only quests.

Obviously the system begins to really shine when you have more than one or two companions and increasing their affection. At low levels it’s very slow and the idea of making a reusable medpac is almost insane, or a large waste of money. Which makes you wonder why even create those items?

Anyway that’s it for this week. Next week we’ll be interviewing a player for the holocron of players aspect of this column. Who will it be? Well you’ll have to read next week’s article! One more thing before I go back to my Jedi Shadow. To all of my reader’s on Nadd’s Sarcophagus, for reader loyalty, I’ll be giving away a bunch of biochem creations (Stims, Adrenals, and Medpacs) if you whisper me! Think of it as a gift for the holiday seasons! Remember the name is Zexu, Jedi Shadow on Nadd’s Sarcophagus. Until then may the force be with you.