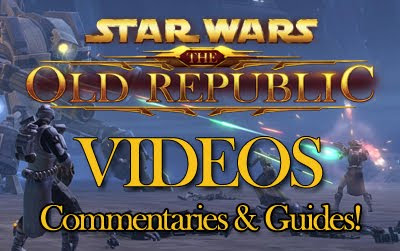 Hello everyone, my names Sheriden and I’m new to swtor-strategies. I’ll be bringing you articles covering a range of entertaining and helpful videos focused on Star Wars: The Old Republic. I have a YouTube channel myself which continues to publish such videos, but you can expect to see videos other than my own. I will make sure to warn you whether each video contains spoilers or not.
Just like other MMO’s and games out there, videos guides can be extremely helpful to your experience. World of Warcraft has the famous ‘Tankspot’ website, which provides videos explaining strategies for killing bosses in many of the games raids and instances. While it is certainly fun to try out a boss with no idea what to expect, it can soon become irritating when you struggle to take them down after many attempts. Let alone dangerous to the stability and success of your guild. Many guild/raid leaders or officers will want to look up all the details they can before heading in. I expect the same to happen with SWTOR.
So that’s when I decided to put not only my knowledge of games and SWTOR itself, but also my video editing and graphic skills to use. I created a channel called SWTOR Extreme on YouTube, and set off trying to provide the community with news, commentaries and guides. After about 2 months, the channel has almost reached 1.500 subscribers, and has over 90,140 video views. Certainly not too shabby.
The first video I’d like to share with you is focused on a play-through of the 4-player Flashpoint named Mandalorian Raiders (contains SPOILERS). It unlocks around level 22, but the current recommended level is 27 according to the quest log. The video provides not only the main cut-scenes and dialogue, but it also provides general tips. It will guide you through the three bosses and their most apparent mechanics or abilities.
The second video worth checking out was a play-through created by the guild Red Rancor, when they got the exclusive chance to play an end-game Flashpoint at BioWare’s facilities (just before the NDA was dropped). Some of you may have already seen it, but I’d like to bring it up again because at the time so much information and videos were coming out it was very easy to miss…and you’re not going to want too! Again, expect spoilers!
I hope you enjoyed both videos, if you did be sure to give them thumbs up 🙂