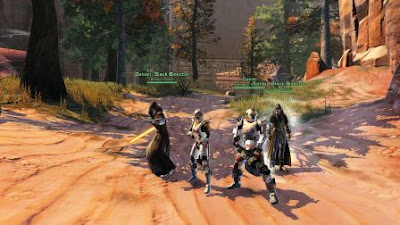 This week I sat down with some of the leadership from Honour Guard, a PvE focused Republic guild playing on Basilisk Droid (EU-PVP) Hope you enjoy the Interview.

Where did your guilds name come from?
When creating the guild we discussed various options for the guild name, we eventually went with Honour Guard because we wanted an honourable guild that plays fairly and gets along with others.

Can you give me a quick 2-3 sentence description of your guild?
We are a group of skilled members who have had a lot of experience in MMO’s. We play fair and we always win. We also play Garry’s Mod

How did your guild come about?
Shortly after the announcement of SWTOR myself and the other two guild leaders decided to create a guild with a friendly atmosphere, prior to creating the guild we were members of a guild in Star Wars: Galaxies.

What kind of play style do you focus on? PvE, PvP, RP:
We mainly focus on PvE but also regularly run Warzones.

What is your guild set up? How do you run your guild?
Our main goal when setting up the guild was to have a guild with a relaxed and friendly atmosphere yet we wish to be a top progression guild without any elitist members. We will also use a loot council system when raiding.

How serious do you play and/or run the guild?
We try to be as friendly as we can when running the guild, we will stick to a schedule when raiding, there won’t be any problems if people don’t turn up for raids(mainly because we allow for our members to have a social life) once they don’t tell us beforehand that they will turn up. But rules are rules.

Do you have ranks or a certain hierarchy in your guild?
Yes we do, our guild ranks are as follows: trial, alt, social, raider, officer, guild master

Our officers and guild master make up the “loot council”, basically when we begin to do operations we will decide between us who loot will benefit the most and also how often they attend to operations. On a more general note, any big decisions are decided on by the guild master, officers and we may also ask the guild members for their opinions.

Why did you choose the Republic / the sith empire?
We chose the Republic because we thought it would be the bigger challenge. We figured most people would go imperial so the republic needed a boost. It’s also nice to play as the good guys sometimes.

Why do you run a guild?
The main reason we decided to run a guild in SWTOR was due to the fact that we have experience in running various clans/guilds over various games, also it’s a nice feeling when you get a guild off the ground and it performs extremely well.

How do you approach Raid Planning?
We are currently speaking to guild members about what time/days suit them best due to the fact that our guild members have other commitments outside of SWTOR, although we plan to raid 3 days a week.

Are you always open for new recruits or do you want to keep a certain guild size?
Yes, we are currently open for recruitment we are looking for friendly members who are serious about playing SWTOR you can apply @ www.honour-guard.enjin.com if you are interested in joining our ranks.

Age Requirement?
We currently have no age requirements, but members will be expected to have a certain level of maturity.

Guild size?
Our guild is currently small with 17 members (not all members are raiders).

What Other Games are you currently playing as a guild?
A certain portion of the guild actively players a number of games together such as: League of Legends, Garry’s Mod, Battlefield 3 and Terraria.

If somebody is interested now how and where can they apply for membership?
As mentioned above they can apply at the following link: www.honour-guard.enjin.com, or they can contact myself (Gsx) , Crasysab or Scarlett-aldun in-game for a chat.

One last question, if there was one thing you could ask the Dev’s to include, what would it be?
We are currently extremely happy with the state of the game so shortly after launch, but if we had to choose one thing, we would like to have customizable options for the UI, such as scale and colour.( We would also like more to be done with space combat!)