Last week in London, some very lucky SWTOR fans were able to get a hands-on sneak peak at the game. The upcoming MMORPG from BioWare has fans in the UK and the US drooling for the opportunity to get their hands on it.

This London event divided into two seatings of about 50 each and allowed players to go through about an hour worth of plan of the origin planet of the class of their choice. It was then followed by a quick Q&A with the developers, including Writing Director Daniel Erickson and Senior Community Manager Stephen Reid.

There are now more than 70 pages worth of content on the SWTOR community boards from people who attended this glorious event. Skimming through those posts will lead you to numerous reviews, news and opinion pieces about the user experience directly from those who matter most- the fans.

But for those of you who don’t have the time to read through each and every post in that epic thread, here’s a recap from the UK Community Event:
Storyline
Storyline is important to any MMORPG but you better believe a BioWare game is going to take the storyline seriously. What good would a Star Wars game be if it lacked the in-depth story and plot that we all love so much?

Each class story seems to progress very much in their own way so no two class stories seem to align exactly with one another. This is great for players like me who like to experience multiple playthroughs but get tired of the same missions being repeated. (Don’t even ask how many WoW alts I have!)

BioWare representatives told players at the Community Event that their companions could die, permanently. There is no word if companions can be replaced after death. This could add an interesting element to the game.
Gameplay
The combat system is described as being easy to learn and giving the impression that your character is tough from the get-go. Many players reported being able to handle 2-5 mobs at once, even at low levels. NPC conversation and back-stories will also make their way into SWTOR, in true BioWare style (think Mass Effect and Dragon.)

Light and Dark Side conversation options are marked with special symbols, a star for any conversation option that will earn you Light Side points and a triangle for options that will align you with the Dark Side but the options only come up when you mouse over. So for the player who wants to see where it takes them, you can choose without looking and see which direction your intuition takes you.

There doesn’t appear to be any penalties for dying in the game, at least not in the origin worlds. You are simply taken back to your last checkpoint with all of your mission data up to that point saved. There seemed to be a large variety of quests to break the monotony of leveling as well.
Confirmations
In the Q&A after the play session, Daniel Erickson confirmed that players will earn titles as they progress through The Old Republic. Some examples we have heard cited before include titles for Sith players like “Darth” and “Lord”.
It was confirmed that companions will be able to take part in Flashpoint instances, though they will take up a player slot. Flashpoints are limited to four players, whether those four are PCs or companions, or some combination therein. 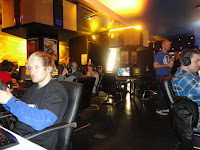 During the Q&A at the Community Event, it was said that there were no new planets to announce. However, the various posts on the matter do not indicate whether this meant there were no planets to announce at present or that all of the planets that will appear at launch have already been announced.
Erickson mentioned that swimming would not appear, even though water areas exist. One player accidently fell into a large body of water (haha- this would have been me) and quickly sunk to the bottom. Unable to swim, he had to walk across the sea floor to get out.
“No Comment”
When asked about the possibility of an upcoming open-beta, BioWare representatives responded with ‘no comment”.
When about the inclusion and/or implementation of mounts in SWTOR, BioWare representatives responded with ‘no comment”.
I guess they still want to keep us guessing about a few things…
Bugs/Complaints
No early game experience is without its bugs or complaints and SWTOR is not quite epic enough to be free of these. However, all of the bugs/complaints seemed pretty realistic and understandable. That’s one good reason to hold an event like this and allow the players to experience it and respond.
Several players complained of lag while playing the game. However, they were using North American servers, since the European servers haven’t been set up yet.
Players also noted various random graphical, pathing and animation-related bugs, but the game seemed to be running smoothly for the most part. Some reports even said that the game looked polished enough for release. That’s exciting news for those of us anxiously awaiting it!
There was one report of a complete game breakage, requiring a quit and restart, but otherwise the reports were positive, even from those who experienced bugs.
So what does the future hold for Star Wars: The Old Republic? We’re expecting nothing but good things. Every game needs to have the kinks worked out and fan reaction such as those that come from this community event are one way in which the company can learn how to provide the best user experience possible. As for this Star Wars fan, I’m expecting SWTOR to live up to every bit of the hype!
DISCALIMER: Keep in mind that the game is not released yet and that certain aspects of the game, storyline and gameplay are subject to change if, when and how BioWare sees fit. Additionally, this is based on fan reactions from the UK Community Event.