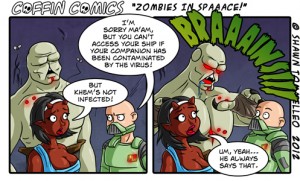 What is BioWare trying to tell us with this recent (the first) world event? Rakghouls are trying to infect everyone and they take a striking resemblance to zombies, as many have pointed out. Zombies in space? It wouldn’t be the first time a video game had done this.

Coffinshaker from Coffin Comics has a real funny cartoon about SWTOR and the current world event going on- the Rakghoul Invasion. He also used this as an opportunity to talk about a current theme in games today- zombies:

Heh, didn’t mean for a double swtor posting this week, but I wanted to get this out there before the rakghoul invasion event ended.  Pretty cool stuff though!  Reminds me of the lich plague in wowcrafts just before WOTLK came out.  But what’s the deal with zombies anyways?  They seemed to have gained quite a bit of momentum in the last few decades.  Hell, I challenge you to name a single FPS game that doesn’t have some sort of zombie level or zombie DLC from the last few years!  Ok, don’t take me up on that offer cause I’m sure you lot can name plenty… my readers are a little too on the ball, lol!  But you get my point.  There seems to be an invasion of zombie invasions!!!  I guess psychologically, we like things that go wrong.  That whole schadenfreude thing.  Disaster movies are a huge seller!!  I think deep down we like to see a little adversity for us to overcome.  I don’t see the human race ever just “settling down” and sipping sweet tea on their porches.  They’d sooner set fire to the planet for something to do before ever reaching a state of utopia.

So what do you think about the trend of zombies or zombie-like creatures in video games today? Is it overdone? Do you love it? What are your favorite zombie games? What are your least favorite?