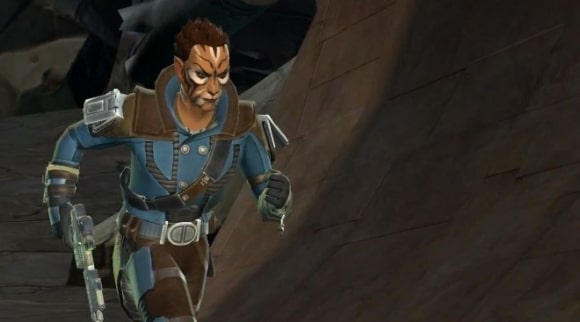 They guys over at  swtor-rp.com got a chance to do an Exclusive Q&A with Damion Schubert and Charles Boyd. The interview  is of course about the upcoming  Rise of the Hutt Cartel expansion, and being a Star Wars: The old Republic Role playing community, the interview covers mostly story and RP questions.

Reading through the interview Interveiw we get the feeling the developers answered  answered the questions prior to patch 1.7 as they speak about a major new system coming “sooner than you think””.

The Q&A Also get’s around Makeb and the new  Cathar race.  Below is a snippet:

SWTOR-RP: Is the planet Makeb a pre-existing planet in Star Wars canon, or is this a completely new planet in lore to be uncovered by players as they travel through it for the first time?
Charles Boyd: Makeb is a completely new invention of the Star Wars: The Old Republic team, and personally as a writer, I can’t tell you what an honor it is to have a chance to add something to the Star Wars canon. Like most of you, I grew up on Star Wars, and this is a lifelong dream for any sufficiently geeky writer.

SWTOR-RP: Roleplayers are always excited to expand their storytelling horizons with new challenges, and we look forward to new ways to do that with such additions to the species like the Cathar. Will there ever be a chance to add other species with the Cartel Market or other means?
Damion Schubert: The answer to this is pretty astonishingly simple – if the Cathar do well, more species will be high on our priority list. If not, this will be a lower priority for us. We definitely have other species that we would like to do, and we’re well aware of the ones the fans consider the most desired. That being said, creating a new player species is a huge amount of work – just because you see NPCs in the game of your favored species, that doesn’t mean it’s anywhere near ready to go. Player species needs art created in a certain way to be customizable, and all of those customization options need to be built to work together. Some races have unique problems in terms of how the art interacts with their worn gear. All that being said, we want to do more, and we are very hopeful that the Cathar proves that there is an appetite for the content that justifies the work.

Check out the full Q& A here