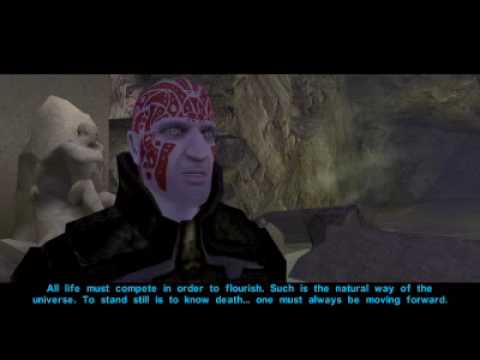 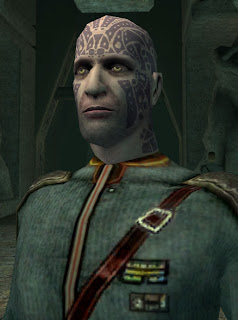 Uthar Wynn was a Sith Master and the leader of the Sith Academy on Korriban during the Jedi Civil War. His Sith Apprentice was Yuthura Ban.

Uthar Wynn was created as a villain for Star Wars: Knights of the Old Republic. Wynn was voiced by veteran voice actor Tom Kane. Wynn later received an entry in The Complete Star Wars Encyclopedia, which was released in 2008.

There are multiple choices for the player to make in Knights of the Old Republic regarding Uthar Wynn’s fate. Revan could side with Ban and kill Wynn. Once completed, Ban would turn on Revan. After her defeat, Ban would plead for mercy and Revan would spare her life and allow her to assume the position of the Academy Headmaster. A second choice involves Revan not allying with either Wynn or Ban; both Wynn and Ban attack him and are killed. A third option has Revan siding with Wynn and attacking Ban. Revan then allows Wynn to live and go back to lead the Academy. The fourth possible outcome has Revan not siding with Wynn, instead attacking and killing him with Ban’s help. Ban then attacks Revan; when Revan defeats Ban, she pleads for mercy. Revan apologizes to Ban and kills her. A fifth choice has Revan choosing not to side with either Wynn or Ban, claiming he was the only true Sith of the three, and killing both.

Revan can also kill Ban for Wynn and then tell the truth about why he sought the Star Map, stating that he never intended to become a Sith. Wynn instantly becomes enraged and attacks Revan, stating that he would “tear the flesh from his bones.” Wynn would also attack if Revan did not tell him that Ban was plotting to kill him. If Korriban is the final world that a dark-sided Revan visits, Revan can tell Wynn that he is Darth Revan after defeating the Headmaster. Wynn recognizes Revan, secretly devotes his allegiance to him, and vows to pledge the Academy to Revan should he successfully destroy Darth Malak. 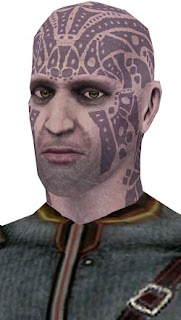 Biography
Uthar was a bald humanoid, possibly Human, whose head was adorned with tattoos, presumably of Sith design. His eyes were sickly yellow; a testament to his power with the dark side. He had an eerily calm demeanor for a Sith. It seemed as though nothing could shake him, though he could simply be hiding his true emotions.

At first, Uthar Wynn studied at the Sith Academy under Academy headmaster, Jorak Uln. Uthar eventually drove his master out into the Valley of the Dark Lords where Jorak would remain, studying inside one of the tombs. Uthar quickly took over the Academy himself and took an apprentice, a Twi’lek by the name of Yuthura Ban.

Near the end of the of Jedi Civil War, Uthar began to notice Yuthura’s ambitions to take his place as head of the Academy and had plans to have her removed. Soon, the mind-wiped Revan came to Korriban, in his search for the Star Maps. Revan managed to gain entry into the Academy and was brought before Master Uthar. Uthar immediately recognized the “dark kernel” inside Revan’s heart from Revan’s amnesiac days as the Dark Lord of the Sith. Revan had gained more prestige over his opponents and managed to impress Uthar enough. He and Yuthura, Revan’s “trainer” in the Academy, took Revan to the tomb of Naga Sadow where he passed his final test of discovering the Star Map and bringing back a lightsaber.

Uthar was prepared to finally deal with his renegade apprentice by pitting Yuthura against Revan. Unfortunately for Uthar, Revan had befriended Yuthura and helped her kill him. Yuthura had larger ambitions though and turned on Revan soon after Uthar’s death. Revan managed to defeat Yuthura. However, her life was spared and Revan returned her to the light. She left for the Jedi Enclave on Dantooine.
Due to Uthar’s death and Yuthura’s redemption, the Sith Academy was thrown into civil war.