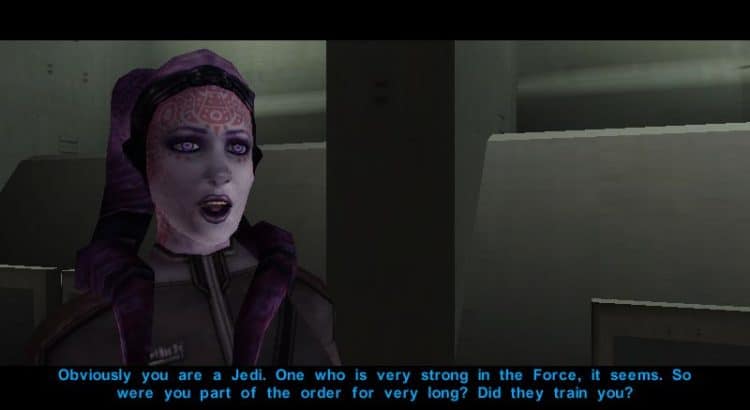 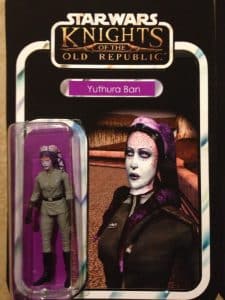 Yuthura Ban was the Twi’lek apprentice of the Sith Master Uthar Wynn, the head of the Sith Academy on Korriban during the Jedi Civil War.

Even though she herself was an apprentice, Yuthura was also a lead instructor and mentor at the Sith Academy. She respected initiative and cunning in her students and was not short of either herself. Like most of the Force-sensitives at the academy, she wore the uniform of a Sith officer as opposed to robes.

Originally from Sleheyron, Yuthura was a slave to Omeesh the Hutt, a cruel Master who tortured his slaves regularly. Craving vengeance and determined not to simply be “nothing,” Yuthura maneuvered herself into a position to strike out at her master, slitting “the drunken worm”‘s throat while in his bedchamber. As she fled Sleheyron by stowing aboard a cargo ship, it was inevitable that she would be discovered by the crew. They abandoned her on a desolate planetoid.

Though by all rights she should have died, by the will of the Force she was relatively quickly discovered by a passing Jedi, who, seeing her Force potential, decided that she should be trained in the ways of the Force. So it was that she was taken to the Jedi Enclave on Dantooine to train despite her somewhat advanced age.

Though possessing exceptional skills, she was unable to let go of her anger towards her former oppressors and all others who would practice slavery. She saw the apparent Jedi inaction over the matter as intolerable. Unable to resolve her differences with the Jedi, she abandoned them and their teachings, swearing to find a new means to achieve the power necessary to combat the wickedness of slavery throughout the Galaxy. She was to find these means in the Sith Academy on Korriban.

Once initiated, her natural talent and ability, coupled with her anger towards the Jedi and hatred of slavery, saw her quickly rise through the ranks, finding herself the apprentice of Uthar Wynn, headmaster of the academy.

Eventually her thirst for power led her to devise a devious plot to overthrow her master, a plot involving a promising new recruit to the Sith, within whom the Force bristled with startling intensity. Though sensing something odd about the young Human, Yuthura never for a moment suspected that she had in truth enlisted the services of Revan, the deposed Dark Lord of the Sith. Together they formed a loose bond; Yuthura opened her heart to him and Revan was able to know more about her past life and experiences which led her to the Sith.

With Revan’s help, she was able to best her master and then, in a calculated—if not entirely desired—act of betrayal, she turned on the former Dark Lord. For all her considerable power, she was no match for Revan and yielded to his superior might. Revan was able to convince her that she was in error and bring her to the path of the light. She then renounced her position as headmaster and left the Sith academy.

Yuthura may have reached the Jedi academy on Dantooine to be retrained before the attack on Dantooine by the Leviathan. If she did, she may have been killed during the bombardment; if she did not, it is likely that she fell victim to the First Jedi Purge a few years later.

There are many choices for the player to make in Star Wars: Knights of the Old Republic regarding Yuthura’s fate. The most extreme light side choice will be outlined later, with the other options detailed below.

After Revan passes the prestige trials to enter the tomb with Yuthura’s help and completes the assignment therein, Uthar tells Revan to fight Yuthura to pass the final trial and show no mercy. Depending on the player’s previous choices, the player will obtain different reactions from Yuthura and Uthar throughout this section of the game. (Yuthura won’t be surprised by Uthar’s attempt to turn Revan on her if you’ve informed her of his plot, Uthar won’t be poisoned if you didn’t undertake Yuthura’s task, etc.)

Yuthura’s home planet Sleheyron was originally planned to have appeared in KotOR—after it was scrapped; however, it was written into Yuthura’s background as a tribute to the effort that had been put into planning it.

If Revan plays through Korriban after being imprisoned on the Leviathan, he or she can question Yuthura about what the Sith Lord used to be like. If the player mentions that he/she is Revan, Yuthura will laugh at him; alternatively, after the attempted coup, if Uthar is favored, he will recognize Revan and devote the Academy to him.