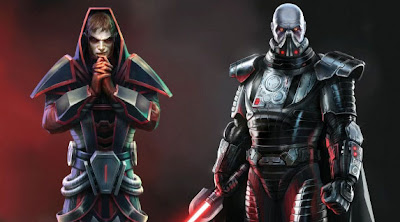 Mondays story about Star Wars: The Old Republic writer Daniel Erickson’s explanation of how someone writes for the Sith Empire sparked a huge amount of discussion on the official forums.

There was so much discussion in fact, that Daniel Erickson took to the official forums to further explain his reasoning and thought process behind writing from the Empire’s point of view.

Of the conversation occurring across the official forums, Erickson had to say, “An interesting thread. I always like to see what responses the philosophical discussions provoke. Hopefully people noticed that there were no quotes from me saying the Sith were good — even the interviewer ended on it being an excuse to unleash ones hate.“” After that intro, Erickson goes on to deftly explain the complexities behind writing for ostensibly the “evil side” in a manner that makes them more than dastardly villains with cape and cane. It’s a short, but very good read and we highly recommend it for anyone with even a passing interest in Star Wars: The Old Republic.

If you were raised in a culture that believed that an all-knowing god chose one man to rule over all others and passed that right through their bloodline, it would not seem odd, evil or tyrannical to you that there was, in fact, a king who fulfilled that role. Similarly if you were raised to think an entire group of people were marked as superior by their abilities (the Force in the case of the Empire) as to be above the law in the same way it would seem as natural as the aristocracy did for thousands of years of human history. If you were one of those privileged people and were taught to embrace your most base emotions, to take whatever you could grab by strength of arms or scheme and wit, that it was your ambition and lack of restraint that brought you freedom and purity

You see where I’m going with this. Its important to realize that while no amount of a dark side embracing Sith justifying himself to us (if for some reason you could get one to deign to do so) would convince us that he was a good person (he is after all pro-hate and pro-murder along with being anti-restraint), he does not see himself through our filter or he could not be who he is. Nor does the Empire as a whole see itself as the Republic sees it. If it did any stories told from that side would lack depth or compelling drama. “So, Darth Evil, it seems like were in the wrong here…” “Yes, Admiral. We are. Were very bad people. My mother is extremely disappointed in me.”

Storytelling is about conflict and the conflict between ideologies and cultural perspective gives us some of the richest material to work from.