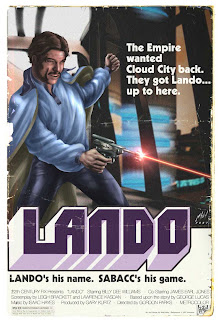 As we’ve probably said in the past we get sent a lot of videos here at swtorstrategies. Many of them are, shall we say, not worthy of sharing with you. Some, however, demand attention and need to be shared. Blackstar Warrior is one of those. This morning I noticed a headline which spoke of a Lando Calrissian-centered blaxploitation film, “Blackstar Warrior.””

Of course I clicked. How could I not? The trailer I discovered there — which apparently screened at San Diego Comic-Con back this summer — stars Leonard Roberts in the role made famous by Billy Dee Williams. I immediately recognized Roberts’ smirk from “Heroes” (he was phase-shifter D.L.), but some might also know him from an arc he had on “Buffy the Vampire Slayer.” I recognize the Han Solo actor, but I can’t recall his name.

Lando Calrissian is the baddest mother in space in this blaxploitation-style trailer for Blackstar Warrior. The spoof trailer, for a spinoff movie that puts the Cloud City player in the center of the Star Wars action, boasts badass punch lines and some sexy stormtrooper babes.

The spoof isn’t quite as self-aware as last year’s “Black Dynamite”; it’s played pretty straight for the most part. It’s fun though, and if this thing were actually developed into a feature-length film (don’t hold your breath), I’d be there opening day.

Don’t miss the three-part mockumentary below about the “black Star Wars” that goes along with it. Check out Lando Is The Man for more info.