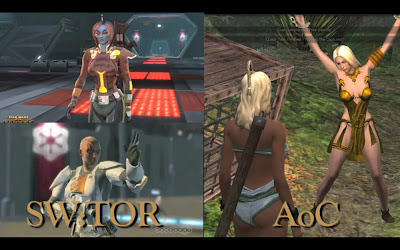 Many people are talking about SWTOR and the impact it will have on other similar games in the industry. It’s been called a WoW-clone and a WoW-killer and there have been comparisons made to Rift and other MMOs. Just in time for another MMO comparison, Massively brought us an article that asks Can AoC survive The Old Republic?
Massively says:

Even if you’re heavily invested in other games, chances are good that you’ll at least try SWTOR, amirite? I myself will be moonlighting in a galaxy far, far away at some point, and while I don’t plan on making a permanent home there, it will likely take a chunk of my gaming time for a month or two.

Truer words could not be spoken. Just about every MMO player I know wants to at least try SWTOR. Some if for no other reason than to stubbornly prove it’s not going to be as awesome as everyone says.

So what could this mean to AoC and what might the folks over at Funcom do to make sure they survive the wrath of SWTOR? The article attempts to look at both games objectively and tell us what AoC might have to offer as opposed to TOR.

The article presents a point-by-point comparison of the two MMOs and the different benefits that each has to offer. While it’s true that a lot of people will want to try out SWTOR, there are probably still a lot of gamers who will want to come back to their old game, their comfort zone, be it AoC or some other MMO.

What do you think, can AoC survive TOR?