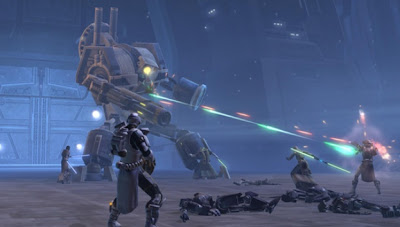 “Drop group,” Niggles whispered me. At this point in our relationship I learned that if Niggles requested something, it was usually for my benefit.
An invite message promped from Niggles a few seconds later.
“I’m not ready for this.” I whispered back.
“Don’t worry Zexu. This is an easy operation.”

Welcome back to another installment of Intergalactic Intel! My apologies for being so late on this article, but you get two today! I’m reporting from the wonderful San Francisco, as I attend GDC. Without further ado let’s get down to this week’s topic. Operations.

Operations are what we call raids here in SWTOR. You can complete them with eight or sixteen people. In addition to this you have normal mode, hard mode and nightmare modes to attempt to complete. Each level providing a new challenge of difficulty and a new amount of loot.

The team I ran with this week ended up going to Karagga’s Palace. The operation it self was done phenomenally. The music, the art work, everything seemed to flow very nicely as we traversed the area. The cut scenes were a little disappointing. Usually in quests we group together and talk, but each person handles the story individually, instead of as a group. This is understandable, this way you’re not stuck playing with an evil or good story line depending on your preference.

Even as a veteran MMO player, this is my first actual time tanking a raid scenario. I was beyond nervous, but quickly became adjusted to it after watching so many other people tank before. I was more surprised that I found myself over geared for a normal mode Kragga’s palace. In fact the only upgrade I received was a new relic.

Each fight was different. On normal difficulty I wasn’t taking a ton of damage, nor were my healers having trouble keeping up, allowing us to really focus on the mechanics of the fights. A lot of the mechanics I had seen before from World of Warcaft or from other hard mode flash points. I feel like the fight mechanics would be more relevant and challenging in hard mode and nightmare mode levels of play.

There is one boss in particular that I would like to discuss, G4-3B. G4 is a fight that i believe Bioware should try and mimic in various ways. G4 has a buff on him that increases his defenses from all attacks constantly, making your damage out put against him pitiful. To remove the debuff two players need to line up puzzle pieces on monitors to fire a laser which temporarily removes the buff, and allows you to deal some real damage to him. While this is going on mines are being placed, and droids are stunning people. This was the only fight I was entirely nervous about the entire time. Bioware needs to attempt new ways of designing raid encounters to separate themselves from World of Warcaft. I feel like this fight did a great job of it.

That’s all for this post! Check in next week as we prepare for patch 1.2 next month. Tune into Swtorstrategies.com for all the latest and greatest news for all things related to The Old Republic. Until next time, may the force be with you!