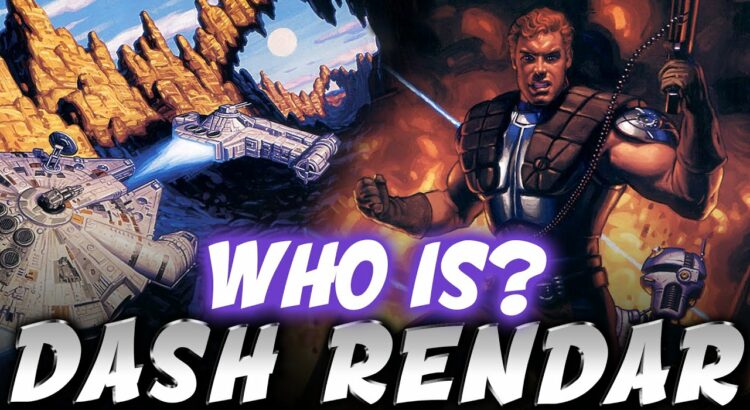 Following up on Matt’s “let’s play ” artciel about Shadows of the Empire the other day, I thought I would do an in depth analyst of the main character of the game: Dash Rendar.

Dash Rendar is a character in the Star Wars Legends continuity, first appearing in the 1996 video game Star Wars: Shadows of the Empire. In the game, he is portrayed as a skilled and capable bounty hunter, working alongside the main characters of the game – Luke Skywalker, Princess Leia, and Lando Calrissian – to stop the nefarious plans of the crime lord Prince Xizor. While Dash is a relatively minor character in the grand scheme of the Star Wars franchise, he has gained a significant following among fans due to his charismatic personality and his role in the Shadows of the Empire multimedia project, which included the video game, a novel, and a comic book series.

One of the first things that stands out about Dash Rendar is his appearance. He is described as being tall and athletic, with a ruggedly handsome face and long, flowing brown hair. He is also depicted as being well-dressed, with a preference for sleek and stylish clothing. This, combined with his cocky and confident demeanor, gives him the appearance of a suave and debonair hero – a sort of space-age Han Solo.

But Dash is more than just a handsome face. He is an extremely skilled pilot and fighter, able to take on hordes of enemy fighters with ease and emerge victorious. He is also a skilled mechanic, able to repair and modify his ship, the Outlander, to suit his needs. He is highly resourceful and clever, able to come up with creative solutions to seemingly impossible problems. All of these skills come in handy during his various adventures in the Shadows of the Empire multimedia project.

One of the defining characteristics of Dash Rendar is his loyalty. He is fiercely loyal to his friends and allies, and will go to great lengths to protect them. This is especially evident in his relationship with Luke Skywalker, whom he considers a friend and mentor. Dash is willing to put himself in harm’s way in order to protect Luke and help him achieve his goals, even if it means going against his own interests.

This loyalty is also evident in Dash’s relationship with Princess Leia. Despite the fact that they are not romantically involved, Dash is deeply protective of Leia and will do whatever it takes to keep her safe. This is demonstrated early on in the game, when Dash goes head-to-head with a group of bounty hunters who are attempting to capture Leia. He takes them down with ease, showing that he is not afraid to stand up for what he believes in.

While Dash is a loyal and noble character, he is not without his flaws. One of the most prominent of these is his tendency to act impulsively. He is often prone to making rash decisions and acting on them without thinking through the consequences. This can get him into trouble on more than one occasion, and it is something that he has to work on throughout the course of the game.

Another flaw of Dash’s is his ego. He is extremely confident in his abilities and often lets his ego get the best of him. This can lead him to underestimate his opponents and overestimate his own capabilities, which can be dangerous in a galaxy as dangerous as the Star Wars universe. Despite this, Dash is also self-aware enough to recognize when he has made a mistake and is willing to learn from it, showing that he has the potential to grow and improve as a character.

Dash’s ego and impulsive nature also lead him to sometimes make poor decisions when it comes to his personal relationships. He has a tendency to flirt with and pursue women without really considering their feelings, and he often brushes off their attempts to set boundaries or say no. This can be seen as a sign of disrespect towards the women he interacts with, and it is something that he