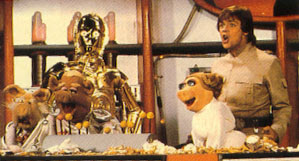 From 1980, this episode of the Muppet Show starred Mark Hamill as Luke Skywalker. It starts off with scheduled guest Angus the Argyle Gargoyle getting ready to go on the air. But suddenly Luke Skywalker, R2-D2, and C-3PO crash into the studio, in search of Chewbacca the Wookiee, who was kidnapped, and since nobody liked Angus, they replaced his guest spot with the stars of Star Wars. Luke isn’t really interested in hosting the show, so he calls in his ‘cousin’ Mark Hamill to help out. Mark does the necessary song-and-dance parts, until Luke Skywalker and the droids hijack the Swine Trek. After the Swine Trek makes a smooth landing, Luke and the Droids are captured by Derth Nader, and Chewbacca the Wookiee comes to the rescue.

It’s amazing. When I watch this, I become a kid again.

I can see my parents next to me on our old couch, telling me I can stay up to watch the Muppets, and then it’ll be time for bed. (Mommy’s grown-up Muppets, my mother used to say, as opposed to the ones on Sesame Street.) And I watched, with joy but also a slight sense of dread, as each skit would bring me that much closer to the end of the show, and to bedtime.

I settled into the couch, and then, suddenly — CRASH! What was that? Luke Skywalker! C-3PO! R2-D2! The Star Wars guys were on the Muppet Show! I could barely handle the sheer coolness of it all.

Watching the same episode again now, of course, different things stand out. How lousy Mark Hamill is as an actor. His 70’s argyle-sweater-vest style. The pathetic sight of Chewbacca and R2-D2 being made to dance, once a cause for childish glee, now seems a spectre of the slow decline of the Star Wars franchise.

On another level, it occurred to me that the Muppet Show, taking place in the pre-MTV era, was really the forerunner of the music video. Each episode presents at least 3 or 4 songs with some sort of visual interpretation of the music. If there’s a difference, it’s that the Muppet Show lacks the hyperactive editing style of today’s videos, so you can actually focus on what’s going on — you’re not barraged by disjointed stimuli. It’s almost quaint. The gentleness of the songs also struck me as a sign of an era that has passed us by. Would there be a place for the Muppets on television today? Who would the guest stars be? Eminem? Rihanna? Robbie Williams?

But enough of such worries. I’m watching Luke Skywalker and the Muppets, and it’s just too amazing for my young brain to process. I wriggle my toes inside my Cookie Monster pajamas with the feet on them, and as Zoot blows that last, sorrowful note into his saxaphone, the credits roll up the screen, and I know it’s time for bed. But I’m not even tired!