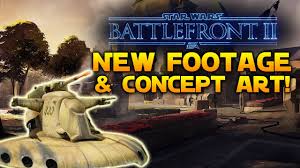 If you’ve been hanging on looking for more new info about Battlefront 2, then here’s a great video you will want to check out. In this video, you’ll see some great new footage as well as concept art for the game and behind the scenes goodies. See how the actors worked and how it was all put together for the complete package we see at home in our games. You’ll see Yavin 4, AAT tanks, the Death Star, and more. It’s actually really fun to watch, especially if you’ve been hanging around waiting for something new or interesting about Battlefront while we await the game itself.

From the poster, BattlefrontUpdates: “”EA were kind enough to send me a part of the behind the scenes trailer for Star Wars Battlefront 2 (2017) as well as tons of new concept art from various planets!”

So what do you think? Honestly, everything we’re seeing about the game so far looks awesome. It would appear they listened to the fans and that they are giving everything the first game was lacking, making this a winner. It’s also really interesting to see the actors and all the cool stuff that goes into making a game like this. To know they use live actors, real photography, and other tricks along with their animation and computer graphics paints a big picture of how much actually goes into it.

So if you haven’t already, check out the video of exclusive new footage and concept art and let us know what you think. Are you excited for Battlefront 2?