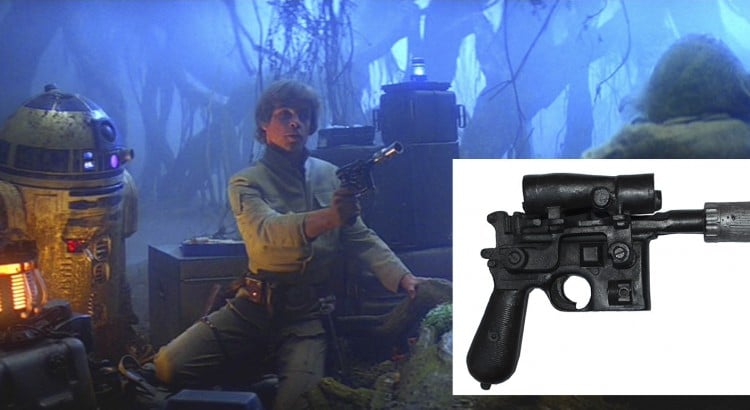 If you have a lot of cash, that is. While there has been a lot of mystery surrounding Luke Skywalker since the release of the latest film, Star Wars: The Force Awakens, it seems it has increased the popularity of Skywalker memorabilia even more. It’s not a huge surprise then that when the DL-44 Blaster Luke Skywalker used in the 180 film “The Empire Strikes Back” went up for auction, fans are taking note. It’s starting at $200,000 with Nate D. Sanders.

Here is the description from the auction listing:

Luke Skywalker’s DL-44 Blaster from ”The Empire Strikes Back”‘. This iconic hero gun is the same model used by Han Solo, a design based on the German issue Mauser C96 pistol and custom made by casting the original prop used in the first ”Star Wars”. Gun retains its original flash suppressor and scope, though it does not (and never did) fire, making it the lighter model used in the movie for non-firing scenes. Made of gray, silver and brown colored fiberglass. Blaster was gifted to original owner by Hamill during an episode of ”Jim’ll Fix It”, a children’s show on BBC Television. Measures 12”. Gun is in original 1980 filming condition and has some wear, including one glued section. Overall very good condition. With provenance from Sotheby’s 18 March 1998 sale, as lot 48. A very rare and desirable piece of ”Star Wars” history.

As of the time of writing this, there are no bids but it will be interesting to see how high this will go now that word is out that the blaster is available. Star Wars memorabilia, especially that used in the films, will often go for a lot of cash. Princess Leia’s gold bikini from “Star Wars: Return of the Jedi” sold for $96,000 in 2015, for example.

Mark Hamill who plays Luke Skywalker in the “Star Wars” saga, gave the gun away during an episode of “Jim’ll Fix It,” a BBC children’s television show, and it was last auctioned by Sotheby’s in 1998, according to the auction house. So it will be interesting to see how far it goes this time.

If you had the money to burn, would you want to own Luke’s blaster?