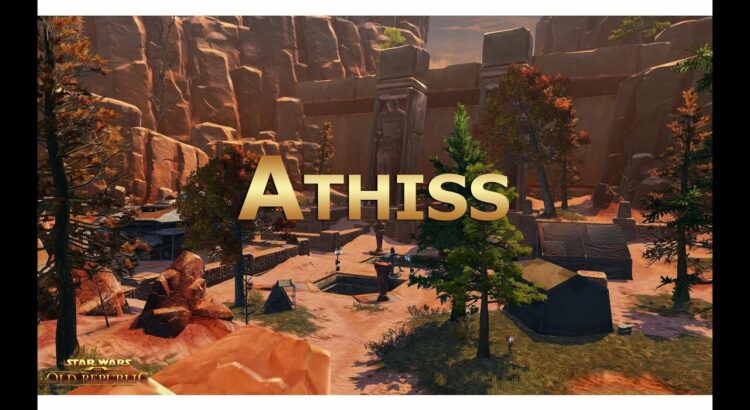 Athiss is a planet located in the Outer Rim Territories of the galaxy and is home to a number of different species and cultures. It is known for its rugged terrain and harsh climate, which has led to a fiercely independent and self-sufficient population.

The planet was first discovered by the Sith Empire during their expansion into the Outer Rim. They quickly established a number of settlements and mines on the planet, exploiting its natural resources and using the harsh environment to train their soldiers and slaves.

As the Republic began to push back against the Sith Empire, Athiss became a battleground for control of the planet. The Republic and the Jedi Order established a presence on the planet, but they were met with resistance from the native population and the Sith forces already on the planet.

Despite the ongoing conflict, the inhabitants of Athiss continued to thrive. The planet is home to a number of different species, including the Zabrak, Twi’lek, and Mirialan. Each of these species has their own unique culture and traditions, but they all share a common sense of resilience and determination.

One of the most notable features of Athiss is its extensive network of caves and tunnels. These caves were originally used by the Sith as a training ground for their soldiers, but over time they became home to a number of different species and cultures. The inhabitants of the caves formed their own communities, complete with their own laws and customs.

Despite the ongoing conflict between the Republic and the Sith Empire, Athiss remains a fiercely independent planet. The inhabitants are known for their resourcefulness and determination, and they continue to thrive despite the challenges they face.

Overall, Athiss is a fascinating planet with a rich history and diverse population. Its harsh environment has shaped its inhabitants into a resilient and independent people, and it continues to be a key location in the ongoing struggles between the Republic and the Sith Empire.