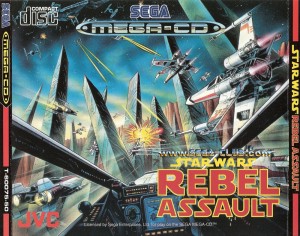 Since we try to cover all starwars gaming news here on SWTORStrateies, I thought it was about time I started a new column covering all the old classics. I don’t know how often I will make posts like this, but the point is I will play thought my old collection of Star Wars games and write about the experience. I will also post videos as often as it is possible. The first game I will play again is Star Wars: Rebel Assault.  This is a Sega CD review, so you probably know what to expect. Really good audio, shit video. And you’d be right. The majority of the footage in here consists of moving computer renders. These give you the important stuff, like your levels and environments. They are pixelated crap. The other small portion of screen time goes to animated characters, which hold up pretty well. Unfortunately, you don’t get penalized by not being able to see a character’s lips move, while you DO get penalized for careening off a shadowy canyon wall. Let’s begin!

This is a game where you’re meant to be flying fast and dodging shit and running at breakneck speeds through trenches. Therefore, while pixelation can be tolerated in many other Sega CD games, it’s a real showstopper here. Lines defining walls and protrusions blur together, pixel noise constantly shifts around the screen, shadows mix with dark walls, empty, navigable spaces often blend near-seamlessly with solid walls. The result, aside from the lack of any real detail at all, is that it’s hard to tell where to go, and what to avoid.

As far as gameplay goes, you must be the only pilot on the clock. The other members of your squad show up in beginning and ending cutscenes, but they fortuitously go on various, lengthy union breaks during the actual combat of the missions. This means you’ll be taking on fleets of TIE fighters, armies of walkers, a Star Destroyer, even the Death Star, all by yourself. The rest of your squad then comes back together to congratulate the team on a job well done.

You’ll play through 15 missions based loosely on events that took place in the movie, and shifting each level between cockpit and third person views. You will also take out troopers on foot. Every level, regardless of ship or view, is an on-rails shooting gallery. You have extremely limited control of your ship, except to dodge oncoming objects to left or right every once in awhile. Meanwhile, the virtually incomprehensible video plays around you, while animated enemies dance across the screen, blissfully unaware of any turns or twists the video (and thus, your ship) is making in the background.

The worst part of the game has to be the controls, even more so than the video, because they are painfully sluggish. It will take about two to three seconds to drag your crosshairs from one side of the screen to the other, so tracking any enemy is impossible. You’ll have to either see them in the center of the screen, know where they are ahead of time, or let them pass right by – which of course causes damage to you.

Except for a few early training missions, where you’re tasked with dodging walls or asteroids, most of the missions in the game revolve around shooting multiple objects, such as a large group of turrets, or many parts of a single object, such as the armor plating off of a walker. This means that you’ll speed around on an “attack run” and try and shoot at anything marked with a green bracket. If you don’t get them all in the first pass, the CD will take a quick breather, and then reload the beginning of your run. With the sluggish crosshairs, you might have to play through your attack loop three or four times before you shoot everything, and the game drags on endlessly until you do. The result is that each mission has maybe three minutes worth of actual content, but may take ten minutes to actually finish. Are you seeing the potential for boredom here? The entire game is short as well, and will probably take two hours to finish altogether – barely even worth the price of admission.

The audio is – ready? – CD quality, and consists of loops of the music from the films. Just like every fucking other Star Wars game! Seriously, I have reached the point of saturation as far as these clips go, and I’m getting to the point where I want to punch composer John Williams in the ear. And I like Williams. Aside from the fact that you’ve heard every piece of this music before, levels will play only one to two minute loops of “actiony” sections from the music. If you haven’t finished your mission before that point, the audio will awkwardly start over again. After three or four times, it makes it seem as if even the music is unsure as to how long these sequences will last.

Voice work features prominently in the game, which is bad news for you. A lot of janitors and friends of producers apparently got in the booth for this game. One of the reoccurring squad leaders sounds like a gameshow host – “Follow me and turn left to… forty-eight degrees!!” As said before, your pilot’s voice is nauseating. At the very end of the game, the kid actually says “Yahoo!” Not a whooping cheer, he deadpans it like it was a word.

Finding Rebel Assault will be far more trouble than it’s worth. Everything in here was done much better once actual 3-D gameplay, which is ultimately what all the computer renders here are trying to simulate, comes around. Rogue Squadron for the N64 is a good example of this, and seemingly rips off a few missions from this game, but with much better results. If you’re really insistent on playing Rebel Assault, I’m pretty sure a version was released for the PC, and will almost certainly contain better graphics than the ones found here. Still, the only real chance for greatness with this game would be if there was a compelling new story, and likeable, emotional characters. Of course, the cheap way was to rehash the movie plots and slap in wooden dialogue and boring characters. And what have we learned about the corporate mindset? The cheap way always wins.