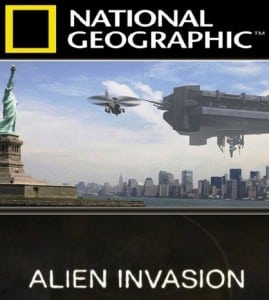 To be honest, I’m not sure I will call this a documentary, but it fits nice in our weekend column on speculative space documentaries, and I have always liked this show.  So today I present you When Aliens Attack.  This was a television show that aired on the National Geographic Channel a few years back. I use to only see alien ET UFO type shows on the History Channel. Now, we have more documentaries based on truth and experiences that allow us to share in logic and inspiration for our imaginations.

I enjoyed seeing the “What If” factor that the writers came up with and researched what was available to us on this planet as far as possible defense. We have military assimilations as what we call war games and this allows us to begin working models in scenarios with the various levels of our intelligence communities around the world.

Most will work with each countries military intelligence and defense organizations along with possibly the United Nations. I appreciate the advancements we are making with our television shows, which offer not only entertainment but also education.

One of the important parts of the future will be remembering that the first thing that will happen in our way of thinking is that our satellites will be attacked first which will knock out most all our formal communications. The fact was mentioned that any aliens who can fly through space and arrive here could certainly defend themselves. The show was based on the scenario that aliens are malevolent and not benevolent meaning our enemies.

That part was one sided but that was due to the title and to share with the viewers the fact that we have been working on alien invasion war games and preparations are real.

Synopsis:
National Geographic: When Aliens Attack: What if an extra-terrestrial force attacked Earth? What might that look like and how will the people of Earth respond? Consulting a cast of world-renowned scientists, survival experts and defense experts, this two-hour special, Alien Invasion explores this frightening scenario. Experts reveal what could motivate alien invaders to attack Earth, and speculate on how the attack might play out — the strategy alien invaders might use and the most effective ways for humans to respond. Well turn to science and history to figure out what works. Well show how humanity can survive this ultimate test