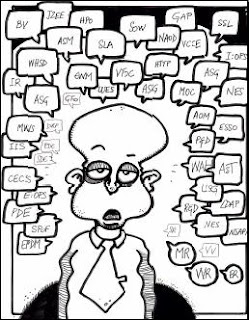 The much-anticipated launch of SWTOR is on the way in less than 2 months now- are you ready? If you don’t know all the lingo, then you might not be as ready as you thought you were.

Maybe you thought you already knew all there was to know about SWTOR but if you’re new to the game, there is one thing you will notice- the lingo is full of abbreviations and acronyms. This is pretty typical of an MMO or any video game for that matter, but if you want to know what’s going on and avoid looking like a SWTOR newb, then you need to crash course on what the big ones mean (unless you plan on pulling out the SWTOR dictionary each time you play).

Luckily, someone has already done all the hard work for you and compiled a full list of SWTOR and MMORPG abbreviations and acronyms for you on the official SWTOR forums. It’s even alphabetized and organized to be your go-to guide for SWTOR lingo.

Abbreviations and Acronyms for SWTOR and we also got one here at our own forum:

Special Note: Any item highlighted in Blue* is an important abbreviation or acronym relating directly to the game SW:TOR. Although the other acronyms may be found in SW:TOR, they are generally seen in many types of online games.

Here is a snippet from the letter A:
Add: Additional Mobs
AC: Advanced Class* or Asheron’s Call E: Area Effect (See AoE)
AFK: Away From Keyboard
Aggro: To gain attention of a mob or the amount of attention.
AH: Auction House (an ingame place to buy and sell)
AI: Artificial Intelligence, relating to the difficulty of a mob
AKA: Also known as
Alt: A players additional avatar or character. Usually secondary characters.
AoE: Area of Effect (See AE)
AoC: Age of Conan (http://www.ageofconan.com/)
APB: All Points Bulletin (http://www.apb.com/)
ATC: After the Treaty of Coruscant*
ATK: At the Keyboard
Attribute: Major statistic(s) for a character which reflect directly on a character’s capabilities.
Attunement: Gaining access for locked doors or content such as an Instance (see Keyed)
Avatar: A players controlled Toon or Character
‘Highcommander’ even added bonus emoticons for your enjoyment and amusement. See the full list on the official forums. Then you can say you are truly prepared for SWTOR launch. (Bookmark it in case you come across something in-game or chat that you don’t remember/recognize.)