There are some exciting events coming soon to SWTOR. You can be a special part of the launch experience on December 20th with the community events announced here on the SWTOR news page. There will be events in both North America and Europe to help you celebrate the launch of the game along with BioWare and LucasArts.

In the US, we have partnered with Best Buy to host launch night events at the Best Buy Union Square in New York City and the Best Buy South Austin in Austin, Texas. Members of the Star Wars: The Old Republic development team will be on hand at each location, including BioWare Co-Founders Dr. Ray Muzyka and Dr. Greg Zeschuk in New York, as well as James Ohlen and Rich Vogel in Austin! Fans attending these events may be able to get their hands on swag, take part in Q&As with the developers, and even get their copy of the game signed!

This news is from the official SWTOR site. They go on to explain what they will be doing for European fans of the game as well:

For our European fans, we will also be holding events in London and Paris! In Paris, we’ll be having a launch event at the Virgin Megastore located on the Avenue des Champs-Élysées on December 14th. Those attending will have the chance to meet Technical Design Director, Emmanuel Lusinchi.

We will also be having a launch event at the Oxford Street GAME in London on December 14th. Fans who make it out to this event will have the opportunity to spend some time with Alexander Freed, Writer on Star Wars: The Old Republic and author of both the “Blood of the Empire” and “The Lost Suns” series of comics.

How cool is that? Since I live in Austin, I really hope to be able to check out these events in person and try to get me some swag for myself. Will you be in one of these cities for a pre-launch event? Drop us a line and let us know. If you’re there, be sure to take a lot of pics, too! 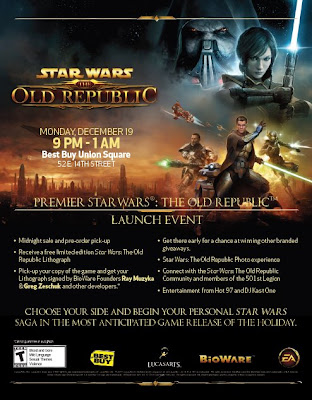