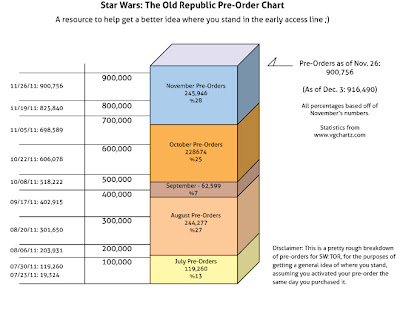 While it’s fun and interesting to see it in graph format, we say “guesstimation” because these stats are not 100% accurate. This is only box sales from North America. It does not include digital copies or copies from Europe. That’s a great deal of numbers missing. In fact, it could be only half of the actual numbers of the game that have been preordered.

Anyway, the stats from vgchartz.com may not be completely accurate. It also includes the disclaimer that it is just intended to give a general idea of where you might stand on the list. For that purpose, with the disclaimer in mind, we think it can be pretty fun and interesting to check it out. Besides, all we’re doing it waiting around anyway, right?

See more about the post and the comments from Reddit users here. The commenters actually bring up some good points about the chart and its validity (or lack thereof) but I still find it an interesting chart. Also, there is nothing else like this anywhere that we can find. Nowhere else has anyone combined these stats to try to create a breakdown of where players might stand- so something is better than nothing.