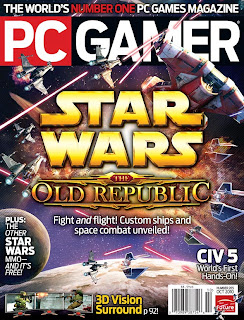 A big question among SWTOR fans has been, will the game feature in space combat? That question has been answered at this year’s San Diego Comic Con with a very big “YES!””

First, thank you to all of you who participated in our Comic-Con Reveal mission! While we didn’t quite make the numbers, we definitely saw how excited the community is about this and how everyone came together. After all of that, there’s no way we could hold back with our special reveal at Comic-Con!

If you’ve been following the news coming out of the Star Wars™: The Old Republic™ panel at Comic-Con International, you’ve heard the announcement that we will indeed have Space Combat as part of the TOR experience! But what does that mean? Space combat is an alternative gameplay experience to the primary game of storytelling, questing, and ground-based combat. In space combat, you fly your personal ship to various “hot spots” on your galaxy map. From there, you will blast your way through asteroid fields, enemy fighters, frigates, destroyers, and a variety of other obstacles that will evoke memories of some of the great Star Wars™ space battles.

To learn more, pick up the October 2010 edition of PC Gamer which hits newsstands starting August 17th for screenshots and an exclusive interview or check back with us in the weeks to come.

Check out the cover of PC Gamer’s October edition here:

While it sounds as if space combat will more enhance the gaming experience it doesn’t quite give the impression that it will be a primary feature. Is this what SWTOR fans were looking for? Let us know what you think regarding the in space combat announcemen