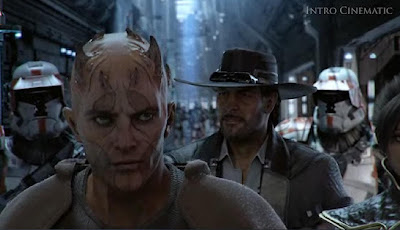 Finally it’s here, the info we’ve been waiting for- another peak at SWTOR!
If you weren’t already dying to play this game, then you will after this 6-minute cinematic.

“For over a thousand years, the Sith were thought to be extinct after a grave defeat in an ancient war. But a select few survived, fleeing to unknown regions to escape Republic forces. In the centuries since, the Sith have prepared; rebuilding their Empire for the day they would make their return to reclaim what was once theirs and take their revenge on the Republic.

Watch the Star Wars™: The Old Republic™ Intro Cinematic Video to see the dramatic reappearance of the Jedi Order’s most ancient and terrible of enemies.

At the EA E3 2011 Press Conference, we saw a mashup of all three trailers so if you’re wondering where that new footage came from, it was from this official, intro cinematic video. If you were watching the conference, head on over now and see the full 6-minute version of the latest video.

But this new one is by far the best trailer released so far of the game. In fact, it ranks up there as one of the best things related to Star Wars that I have ever seen… as in MY WHOLE LIFE! EPIC does not do it justice.