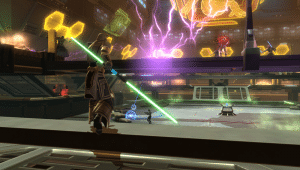 Huttball is my favorite PvP Warzone in SWTOR. Despite what others might say, I really enjoy it. Is it annoying when you get in a group of pugs that don’t know what they’re doing? Sure it is! But I don’t care so much because I still enjoy the game. It’s also a great deal of fun when you tell new players how to win, they listen and you win!

So anyway, I noticed something interesting when thinking about Huttball and how it has a big resemblance to another game I play (and coach) offline- soccer.

This brought me back to an old post we did here on the site in the summer of 2010. It was from our column “The Guild” and we had a reader write in with a real good idea for a PvP zone in SWTOR (not yet released):

This week I’ll be paying attention to some ideas, well one idea mainly, brought to my attention by Danny
Jarzebowski, a reader who contacted me. (Okay I admit it, what you are about to read is something I completely stole from DJ!)

Now I know that when you read about the idea, it might seem a bit, well, insane at first, but actually it might be doable and that with success. This is basically what I talked with DJ about. (remarks in () are by the oppressor Peter)

“Hey I got an intresting idea!
I’d love to play soccer in SWToR, you know like battlegrounds and stuff like that but you get skills like Sprint or Pass and play with your character in game!”
“I think a lot of people would enjoy that, I sure would!”

At first I thought – Dude, we’re still playing the world cup, so of course you’d want to play soccer in a futuristic, though long time ago scenario game, such as Star Wars.

But after giving it some thought and talking a bit more with DJ, I kinda fell for the idea. If the concept was developed in the right way, and you’d play in scenarios with that special “star wars feel”, I’d probably give it a go myself – and I don’t even fancy soccer much.

DJ continues with some more ideas.

How funny is that? Could BioWare have gotten their idea for Huttball here from our site nearly 2 years ago?

Make ya think, no?