Welcome back to ”The Guild”!

This week I’ll be paying attention to some ideas, well one idea mainly, brought to my attention by Danny
Jarzebowski, a reader who contacted me. (Okay I admit it, what you are about to read is something I completely stole from DJ!)

Now I know that when you read about the idea, it might seem a bit, well, insane at first, but actually it might be doable and that with success. This is basically what I talked with DJ about. (remarks in () are by the oppressor Peter)

“Hey I got an intresting idea!
I’d love to play soccer in SWToR, you know like battlegrounds and stuff like that but you get skills like Sprint or Pass and play with your character in game!”
“I think a lot of people would enjoy that, I sure would!”

At first I thought- Dude, we’re still playing the world cup, so of course you’d want to play soccer in a futuristic, though long time ago scenario game, such as Star Wars.

But after giving it some thought and talking a bit more with DJ, I kinda fell for the idea. If the concept was developed in the right way, and you’d play in scenarios with that special “star wars feel”, I’d probably give it a go myself – and I don’t even fancy soccer much.

DJ continues with some more ideas.

“So my thought was you queue up with your character, like you would do for a Battleground. And when you enter you get like the 4 basic skills: Sprint, Pass, Shoot, Flank and probably a banner like in WoW’s arena system, so you know who is who!(I’ll be the guy who never scores – like in real life!)

The thing is you don’t need any specific level, since you don’t kill each other and anyone can play soccer, can’t they?(I doubt Ronaldinho would appreciate that comment) So maybe a game of 30 mins, both halfs 15 min, while you’re waiting for a friend, instance or battleground would be just the thing to do!

Maybe they could also add like a team basically and a little ranking system for those “pro-players””.

And – oh almost forgot! We’re playing this in a Star Wars MMO right? So the soccer field and of course the ball would look just as futuristic as anything in that game (like their outfits!). I can allready tell IF they would do that, it would be a huge success since nothing like that has been made before, (just like the VO (voice over) for all characters and soccer is also the most popular sport in the world.(when excluding baseball, football and cricket!)

Maybe even adding special racial moves and cut scenes to it could give it a little more spice!”

I actually think this could be a great idea – not that we need another competitive battleground system, but just to do something different when you have nothing else to do. I’ve spent many hours riding around aimlessly on my speederbike or trying to get my AT-ST getting stuck in the different wildlife just to see them go all spastic in some weird animal-robot mating ritual – you know, just for fun…

Getting something like this, not competitive, would just give a fun away to chill while waiting for a raid or whatever one is waiting for. If not soccer, then maybe some other game like it.

I’ve tried to compose some pictures where I mix soccer with Star Wars – I hope I’m not offending anyone with this! I sure had a lot of laughs while making it, but then again, I’m weird!

General Grievous as a goalie 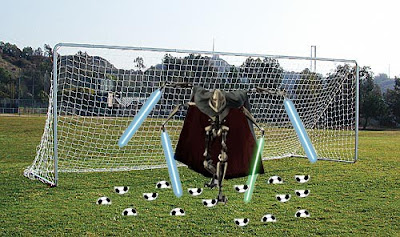 Stormtroopers : Not the best guards nor soccer players! 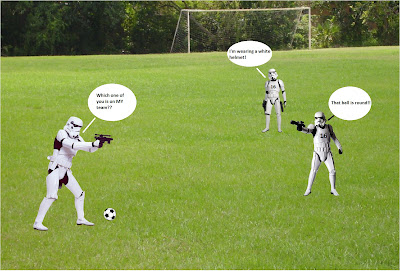 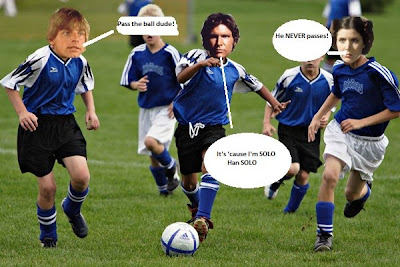 Next week I’ll be looking into some more guild related stuff. If you are a current guildmaster, even in another game, or you’re planning on starting a guild in Swtor, then send me a mail! I’d like to talk to you about your expectations to the game – what are you planning on doing with the guild? Casual gamers, or hardcore players – everything has interest!

Well – have a nice week. You’ll hear from me again very soon! 🙂