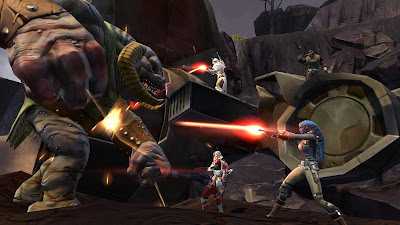 ComputerAndVideoGames.com posted an interview with lead designer and story writer Daniel Erickson. In it Daniel claims that Star Wars: The Old Republic is “the dream game” for BioWare fans and for MMO fans:

“”If you are a hardcore, traditional Bioware fan – a Mass Effect or especially Dragon [Age] fan – this is the dream game. It is an RPG forever. It is an RPG that at the speed and pace that I play RPGs as a gamer, five or ten hours a week, I could never finish this game,” Erickson says. He doesn’t stop there though. “If the idea of story and context really turns you off, if what you want is [just the] complete Disneyland experience, where you run on the rides and repeat the stuff, this probably isn’t your favorite MMO,”.

Check out the original post at CVG. And if you’re lucky enough to be attending the San Diego Comic Con later this month, you can even check out Bioware’s SWTOR offerings in person; they are set to include a panel on multiplayer story, among others.

Check out the full interview here