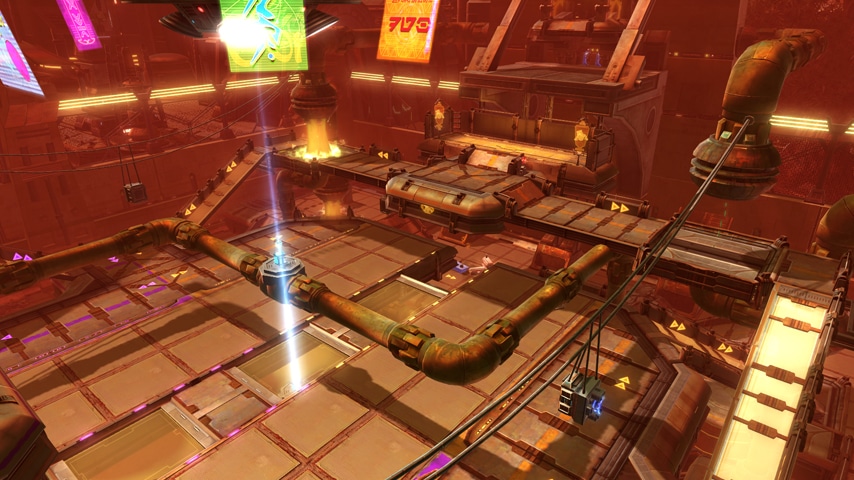 SWTOR Associate Designer, Alex Modny posted a Developer Update regarding Quesh Huttball Pit today. The blog post was followed up by a forum post were he talks about player concerns regarding the map. People that have played the map once on the Public Test Server, says it is hard to play but a pretty fun map. There are a lot of places to get lost in, but it seems like that whoever can keep a slinger/sniper on the ball spawn will win most of the time. Alex Modney’s reply to this is below the blog post:

The most brutal game in the Galaxy is back! The magnanimous Giradda the Hutt has graciously opened up his latest Huttball Pit on the noxious planet Quesh and is currently looking for deaths participants to entertain him!

The new Pit, built especially for Giradda, is a different layout than the inaugural Huttball Pit on Nar Shaddaa. The layout is more vertical and has much deadlier traps, which create a fresh experience but also keeps the same thrill and nail biting moments associated with Huttball intact!

A Huttball map wouldn’t be complete if it didn’t have deadly traps (and Baron Deathmmark as your host!) and Giradda has got something special for you on Quesh! Toxic sludge pipes will rain down acidic pain upon anyone unlucky enough to get caught in the downpour. In addition to dealing damage, the toxic sludge also slows down its victims as the goo sticks to their booties! Giradda hopes you enjoy this as it cost him a couple of credits to outfit a cleanup crew with new protective gear.

Moving down the Quesh Huttball Pit is easy (simply fall down) but getting up can take some navigating. If you aren’t carrying the Huttball, you can interact with the magnetic grapple blaster tables to quickly move to the second level of the structure. Using the magnetic grapple blaster tables also grants an immunity buff for a limited time to “ballistic effects” such as pushes, pulls and knockdowns. This gives players a bit of a respite when they make it to the main killing platform. It is important to note that players with this buff are also unable to hold the Huttball. Baron Deathmark wouldn’t want to make things too easy.

We hope you enjoy the new Huttball and we are looking forward to you testing it out on PTS and playing it in Game Update 2.7!
Happy Hunting!
-Alex Modny, Associate Designer

Quote: Originally Posted by KeyboardNinja View Post Sniper on the pipe = game over, especially with their new defensive buffs. The only classes which even have a prayer of countering that situation are shadow/assassin tanks and vanguards/powertechs, since stun + pull is really the only option. I recognize that it’s very tenuous to get to that point, but 8v8s are chaotic enough that I have little doubt that most competent snipers will be able to pull it off.

I realize the health pot on the pipe seems like a good idea, but it is basically the nail in the coffin to non-sniper classes for this map. At least if it’s not up there, the counter to a pipe sniper can be “a lot of ranged DPS”.

I saw this sentiment being posted last Friday but decided (okay, Musco told me ) to wait until the blog went out before sharing my thoughts on the “snipers on the pipe” (great band name btw).

The center of Quesh Pit is an apples to apples comparison to the center of the original Huttball. In the center of both maps are wide open areas with little in the means of LoS. Take the original Huttball for example, to LoS someone you’d have to leave the center area or play coy around the ball stand. There are no other LoS blockers in the area at all and in addition, snipers and other ranged classes usually choose to setup on the walkways around this center area to rain hot death upon anyone picking up the ball or otherwise in the center area. This is just like the center platform in Quesh although taken to the extreme and hectic because it is closer to the endzone.

So whichever Huttball you are playing, you will see ranged classes go for the high ground and get into advantageous positions. We like how this plays as it makes the center of the map a very important place to hold, a mini-battle as part of a bigger strategy of moving the ball forward. It lets your team move the ball by putting pressure on chasers and it allows you to slow down the enemy ball carriers. Right now we feel from extensive in-house playtests and the little amount of gameplay seen on PTS we are happy with this aspect of the map. HOWEVER! Nothing is set in stone and we will consider all options at our disposal before making a call if something needs to change so please keep the feedback coming and we will discuss it.

I will state again (from the blog just posted) that the design goal of Quesh Huttball was to “create a fresh experience but [one that] also keeps the same thrill and nail biting moments associated with Huttball intact!” I feel we have done this with Quesh Huttball Pit and looking forward to seeing how yall enjoy it, develop new strats for it and squee with elation when it comes up in the queue.

Please continue with the constructive comments and feedback on all things Quesh Huttball Pit!