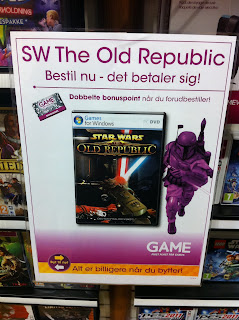 It pays to preorder SWTOR, at least if you order from certain Danish shops.
This neat little find shows that many countries are already promoting pre-orders of Star Wars: The Old Republic.

The sign says:
“Order now – it pays off”
“Double bonus points if you pre order”

The Bonus points are a point system the shop has. You can trade the bonus points to discounts on games. (As if we needed more motivation to buy SWTOR!)

Most video game stores and shops around the globe have similar deals and discounts in the works. There’s no word yet on whether or not BioWare will be offering special deals or discounts to

Other gaming sites around the globe have had preorder deals up for as long back as 2010.

Amazon.com says:
Sign up to be notified when this item becomes available.
No price available.

Some games are really a “must-buy” even if you only play them occasionally. That is the classification many are giving to TOR.

Specific pre-order dates will not be available until there is a more concrete release date of the game but this is not stopping some game shops from starting the ball rolling early. They know that customers are going to want SW:TOR and they want to be the first to be able to offer it.

Allow the pre-order deals to commence!