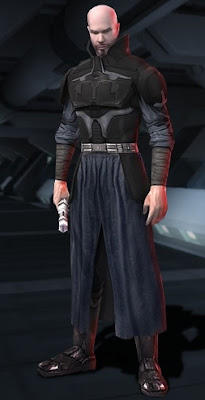 Darth Bandon was a male Human Sith Lord, and the first known apprentice of Darth Malak during the Jedi Civil War. Once a Jedi Knight, he eventually became one of the the Sith Empire’s most dangerous hunters.

Biography
Though trained in his early life as a Jedi, Bandon was never at peace with the ideas inherent in the Jedi Code. He lusted for power and influence, and the peaceful ideals of the Jedi way angered him, as he felt that he was never in control of his destiny and that his life would be ruled by the Jedi Code. Longing for independence, Bandon relied heavily on his emotions, especially the rage that flowed through him, and, as a result, fled the Jedi Order to join the Sith Academy on Korriban as the Sith, under the command of Darth Revan and Malak, rose to power.

Bandon completely embraced the dark side with every fiber of his being and this, coupled with his strength in the Force and utter ruthlessness in his quest for power set him apart from his fellow students, and soon brought him to the attention of Darth Malak. Believing that he had killed Revan, Malak took Bandon as his apprentice, imparting much of his Sith knowledge to him.

Malak was not disappointed with his choice for many Jedi soon found themselves on the wrong ends of Bandon’s double-bladed lightsaber. It was not long before rumors began to spread that Bandon would challenge Malak for the right to rule, as was the manner of the Sith.

Bandon had led the boarding party that stormed the Endar Spire above Taris, and had a clear shot to kill the mind-wiped Revan on the doomed ship. However, before Bandon could do so, a soldier named Trask Ulgo made a desperate and futile charge, giving Revan time to flee to safety. In the end, Trask died at the hands of the Sith Lord. Soon, Bandon and his surviving Sith troopers abandoned the Endar Spire, just in time after detonating the ship. 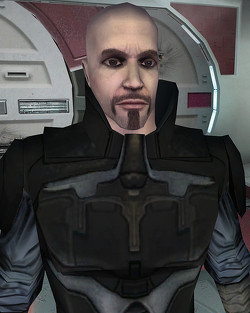 Following the failure and resultant death of bounty hunter Calo Nord, Malak ordered Bandon to hunt down and possibly capture or kill Bastila Shan and destroy the redeemed Revan. Bandon set off to find Revan and accompanied by two of his strongest Dark Jedi with arrogant presumption that they would be no match for him.

Unsurprisingly, Revan recognized Bandon during their later confrontation and told him he would pay for killing Trask. It is not known on which world Lord Bandon finally confronted Malak’s former master, but the battle fought between him and Revan was fierce. Bandon, despite all his skill, was struck down by a far more powerful Revan along with his companions.

With Bandon dead, Lord Malak decided to make Bastila his next and last apprentice, an event which led to his downfall at the hands of Revan.

Personality and traits
Bandon was known for his ruthless and sadistic streak. It was not uncommon for him to take the lives of several people and damage equipment either as an act of self entertainment or to enforce his position for a perceived transgression as minor as walking in his way or trying to talk to him.

Bandon also wore a custom set of light fiber armor, fitted to his robes. He was capable of using Force lightning, Death Field, Force Push and had a red double-bladed lightsaber.