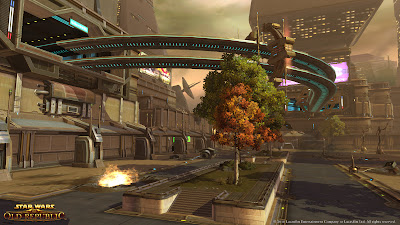 BioWare returns this week with a two-part update for Star Wars: The Old Republic (SWTOR). The first part of the update goes behind the scenes with Senior Environmental Artist Robby Lamb, who details how the game environments evolve and transform. Lamb details the creation and polish of environments in SWTOR and how he works and re-works the content to make it as epic as possible while maintaining the best game performance.

The second part of the update comes in the form of a Community Q&A, which addresses a number of different questions from the community. To summarize, each class will have a number of companions from each archetype. Players can choose which of those will become their main companion and can enhance them through the use of kits. Bounty Hunters will not be able to use jetpacks outside of battle and the Jedi Knight and Sith Warrior will have no healing spec. The Q&A also delves into off-tanking classes, ranged class and stealth PvP and class questions. Check it out below:

Lastly, the Fan Friday segment features a Fan Site Spotlight on Corellian Run Radio, as well as its usual pieces of fan art and forum avatars. BioWare will be showing off Star Wars: The Old Republic at E3, so keep an eye on the events page for details.