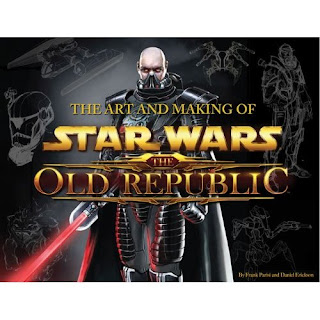 If you’re looking for the book, The Art and Making of Star Wars: The Old Republic, you might not be able to find it any more, at least not on Amazon. Last month the official SWTOR forums were abuzz about the book but now it seems to have disappeared. The release date for the book was listed as November 1, 2011, leaving many fans to speculate that this could be the same time the game is expected to be released.
So why did The Art and Making of Star Wars: The Old Republic get pulled from Amazon’s listing?
No one knows yet exactly why the book was pulled. We just know that it went down quickly after the new about its existence began to spread around the Internet amongst Star Wars fans.
There are several different reasons why Amazon might pull a book that was listed but not released yet. First, it could have been a mistake that they listed it in the first place. Or the author or publisher may have requested that it be pulled.
Another idea is that EA or BioWare requested the book be pulled since its release date of November 1st might lead fans to believe that is the release of the game (which has not been determined/announced yet). Or maybe it was all part of a planned publicity stunt to get people talking more about the game. (Not likely since we couldn’t possibly be more excited than we already are, right?)
Still another possibility is that the book was intended to be a pack-in with the Collector’s Edition of the game and that it was listed by mistake. In which case, it might be that this listing was intended to be posted later for people who didn’t get the CEA of the game but want to have the book. It’s really all speculation at this point but while we wait anxiously for the game, it gives us something else to ponder on.
What do you think? Is the release date of the book related to a possible release date of the game? Do you think we will see SWTOR by November? Why do you think Amazon pulled the book?