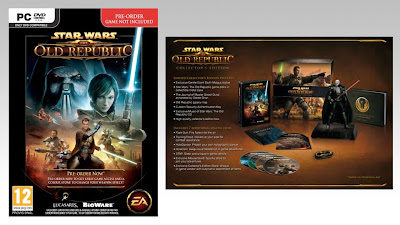 A reader wrote in to us recently with a pretty interesting thought about the types of gamers who have pre-ordered and will play SWTOR. He says, “People who pre-ordered the Collector’s Edition think they’re more important than everyone else.””

He even offers some evidence of why he believes this:

Honestly, I never thought a whole lot about it at first but it’s a good point now that it’s been brought up. Sure, this is a generalization and I’m sure not every single gamer to buy the CE acts this way (I don’t and I love buying CEs of my games) but at least a good portion of them do. I have seen this type of behavior in the game and its community so far, too. I’ve also seen it in other games but it seems like this elitist attitude is coming more often now than in the past among gamers.

One of the main points of a collector’s edition of a game is to have something that many others do not have. It’s a way for true fans to collect a piece of the game’s history and also to feel a deeper connection with the lore or for game collectors to add to their collection. It’s not meant as a social status symbol, although it does seem a bit as such, depending on who you ask.

Do you think people who bought the CE are acting like elitists? Do you feel that you are better than the average player because you forked up the dough to buy the CE?

Our reader/fan thinks we need to stop the problem before it gets out of control like City of Heroes’ class war which causes paying members to refuse to group with free members. I’ve played CoH/CoV and I’ve seen this along with pay-only guilds and raid groups and other divisions.

But once SWTOR launches, will it really be that bad? Will players just want someone to play with, regardless of what version of the game they bought or do you think they will really continue to segregate into CE players and non-CE players? Since the forums are also getting wiped, I think it will do much to ease the situation. Much of the smack-talk was probably just due to players being bored while they await the game’s release.

Once we all have access to SWTOR in the live game, I doubt there will be as many people who really give a crap what version of the game you purchased. If it’s not true and these “CE elitists” try to throw their weight (and money) around in the game, there’s always the option to just ignore them, right?

If someone is acting like a self-entitled jerk around me simply because they purchased a more expensive version of the game than another player, then you can bet that I will ignore that person in the future.