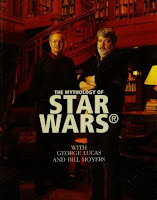 In an oasis of calm, far, far away from the tumult of excitement that was leading up to the premiere of Star Wars: Episode I The Phantom Menace, Bill Moyers joined George Lucas at Skywalker Ranch in northern California to talk about the ancient myths and personal values that have synthesized into Star Wars.

The epic themes in Lucas’ cinematic stories are a springboard for a candid conversation about family, fatherhood, spiritual beliefs, and the importance of moral tales for every generation. Intercut with movie footage from the original trilogy as well as the newly-released prequel, The Mythology of Star Wars with George Lucas and Bill Moyers provides a revealing journey in the company of the filmmaker through some of the most famous scenes of the Star Wars saga.