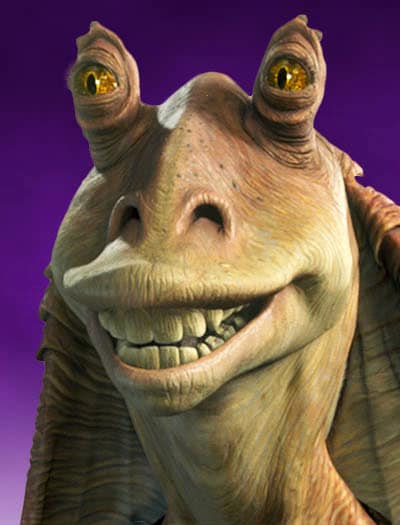 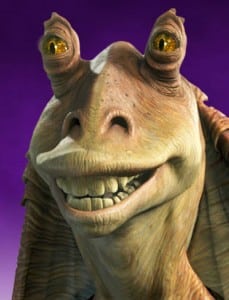 Jar Jar Binks just might be one of the most hated Star Wars characters ever. Honestly, I’m not sure why. I really didn’t think he was that bad. Unlike many who seem to have been annoyed greatly by the character, I found him a bit charming. (I know, I know… don’t shoot me.)

When George Lucas was making Star Wars: The Phantom Menace (1999), he famously said, “Jar Jar’s the key to all this, if we get Jar Jar working. ‘Cause he’s a funnier character than we’ve ever had in the movies.” That really didn’t work out so well for him since Binks ended up becoming one of the most hated movie characters ever. That doesn’t seem to sway Lucas very much, as he still loves Jar Jar

At the recent Disney D3 Expo, Lucas explained how he feels about Binks, why he loves the character and how he was inspired by Goofy.

“I can’t even begin to tell you how much of an influence Disney has had on me,” Lucas said. “I will say one secret that nobody knows; not many people realize that Goofy was the inspiration for Jar Jar Binks,” Lucas said. “I know that you will look at him differently now. It’s pretty obvious, actually, but, um, I love Goofy and I love Jar Jar.”

A lot of people are probably shaking their heads in disbelief or disagreement but it’s still nice to hear from Lucas how he feels and why he isn’t swayed by the fact that so many people really hate Jar Jar.

So what do you think? Love Jar Jar? Hate him? Did this explanation from Lucas change how you view Jar Jar?