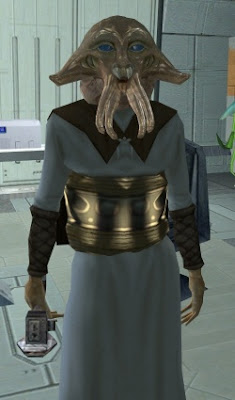 Loppak Slusk was a male Quarren crime boss on Citadel Station representing the Exchange, an intergalacitc crime syndicate. Instructed by G0-T0, the Nar Shaddaa crime boss, Slusk came to Citadel Station over Telos to try and integrate the Exchange into the new Telos. Making an alliance with the Czerka Corporation brought the attention of the Jedi Exile, a Jedi who happened to have a bounty on her head. When Slusk tried to collect the bounty, the Exile resisted, and Slusk’s operations almost came to an end.

He appeared in Star Wars: Knights of the Old Republic II: The Sith Lords

Biography
Around 3,951 BBY, Slusk was instructed by his boss, the Exchange crimelord Goto, to start a new Exchange cell on Citadel Station. After the planet Telos was bombarded by the Sith Empire, the massive Citadel Station had been constructed to serve as a home for displaced Telosians as well as a base for the Telosian Restoration Project, a massive terraforming operation that would restore the surfce of Telos.

The far-sighted Goto hoped that Slusk’s cell could integrate themselves into the Telosian economy before it was reconstructed. Slusk was able to successfully establish an Exchange base on Citadel Station, using the legitamate front of the Bumani Exchange Corporation to act as the Exchange’s legal face. He recruited several lieutenants, including Benok and Luxa. Before long, the Exchange began conducting a number of illegal operations over Telos, including illegal arms and spice smuggling, and controling gambling outfits.

During this time Slusk made a deal with Jana Lorso, Czerka Corporation representative on Citadel Station. Lorso was attempting to sieze control of the Restoration project away from the peaceful Ithorians. Slusk agreed to provide extra muscle for Czerka in an attempt to harrass the Ithorians, in exchange for use of Czerka’s private hangers to use in their illegal operations. This plan proved beneficial for both sides, until the arrival of the Jedi Exile.

Only a short time prior to the Exile’s arrival on the station, Goto himself had posted a massive bounty on all Jedi. Slusk intended to capture the Exile and transport him to Nar Shaddaa. The Exile was arrested by the TSF, pending an investigation of the destruction of the Peragus Mining Facility (the Exile was suspected of involvement). Slusk, utilizing one of Czerka’s hangers, allowed an assassain posing as a TSF agent named Batu Rem to come onboard the station. The assassain took it from there, deactivating security cameras, etc. The assassain failed however, and the Exile was later released. 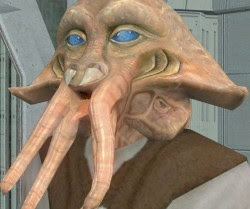 The Exile obviously wanted to make trouble on the station, and put a damper on Czerka’s plan. Lorso contacted Slusk, and asked him to send a band of thugs to one of the dock modules and retrieve a information droid from the Ithorians. Slusk attempted to do so, but the Exile had allied herself with the Ithorians and dispatched the assassains.

Soon after, a illegally-modified blaster carried by one of her assailants, led the Exile to Samhan Dobo, the chief supplier of black market arms on Citadel Station. The Exile subsequently shut down Samhan’s operations with the help of the TSF, crippling a leg of Slusk’s operations.

The final act of the Exile against Slusk was the infiltration of his headquarters. Despite having informed his security personel that no one representing the Ithorians was to be admitted, the Exile nonetheless entered the offices of the Exchange. Slusk was confronted by the Exile, claiming to have come representing Chodo Habat, the leader of the Ithorians on Citadel Station. Enraged that the Exile had been able to infiltrate his headquarters, Slusk ordered his chief-enforcer, Benok, to handle the Jedi.

The Exile killed Benok and his men, and followed Slusk to his quarters. Slusk furious that the Gamorrean gaurding the door to his office had given the Exile access, sent his droid bodygaurds to destroy the Exile, and shut his office tight.

But not even droids could stop the Jedi. Slusk, fearful for his life, asked the Exile what he wanted. The Exile simply told him that she wanted the Exchange to lay off the Ithorians. Slusk was surprised that the Exile went to all the trouble for just a simple request, but the meeting was interrupted by Luxa. Suspicious, Slusk asked Luxa if she had been responsible for the Jedi’s admittance. Luxa confirmed Slusk’s suspicions, obviously intending to take power from Slusk, with the Jedi’s help. The Jedi, however, tried not to get involved. Enraged that the Exile would not help her as she had planned, Luxa attacked the Exile, flanked by her Gamorrean bodygaurds. Together, Slusk and the Exile defeated Luxa’s coup d’état.

Personality and traits
Slusk was very much like most Quarren. He had little regard for the intelligence of others, considering himself to be superior. This arrogance caused him much trouble, as he not only underestimated Luxa’s capability for betrayal, but also the abilities and powers of the Jedi. Nevertheless, Slusk was an adept businessman, and operated the operations on Citadel Station very well, pulling in a stable flow of credits. As such, Goto held Slusk in high regard, viewing successful Exchange bosses as superior to more ruthless ones, or more tactful.

Slusk himself did not have a very large moral center, obviously due to his affiliation with an intergalactic crime syndicate. Nevertheless, Slusk was not above bribery or extortion, and did whatever he could to root the Exchange into Citadel Station, bribing officials, and assassinating other potentially troublesome targets. Slusk also did not tolerate foolishness, threatening to kill subordinates for allowing a representative of the Ithorians to enter the Exchange offices.

Slusk also held his personal saftey in very high regard, surrounding himself with a number of defenses for his own protection. Slusk was always flanked by two droid bodygaurds, similar in construction to the war-droid series. The chamber outside his office was filled with ruthless Gamorrean gaurds. Beyond that, Benok usually had a few men stationed near the door when he was away. Benok himself was Slusk’s “chief of security” (or in other words, top thug). Closer to home, Slusk had to concealed turrets on either side of his desk.

Slusk wore an array of gear, typical for most Quarren at the time. He wore long blusish-white robes, with a wide metal belt going across his torso, and a short brown cape behind him that fell to his lower back. Slusk also had a sonic pistol, similar to other Quarren crime bosses, such as Saquesh.