Star Wars: The Old Republic is turning three later this month, and  to celebrate, BioWare is  making the game’s Coruscant and Dromund Kaas Stronghold housing instances available for just three credits. Even the 5,000 credit normal price is very small. I imagine it’s to help you get familiar with the process of buying them and travelling to them, so you aren’t lost when you want to try Nar Shaddaa and Tatooine.

Other then that, BioWare are giving away some pretty interesting decorations for player housings and guildships. Namely a holographic projection of the galaxy, paintings, and a fireworks launcher.

You can pick these up at the Anniversary Personnel vendor in the Strongholds area of the Fleet from December 16th through January 13th. 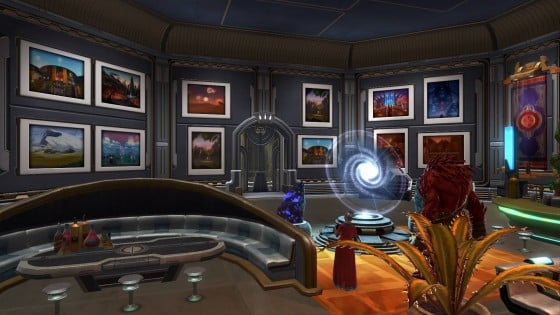 Help us celebrate three years of Star Wars™: The Old Republic™! For a limited-time, move into Coruscant and Dromund Kaas Strongholds for only THREE CREDITS (normally 5,000 credits) plus get free decoration rewards!

Visit the “Strongholds and Crew Skills” area of the Republic or Imperial Fleet to get your rewards:

Hurry – get your celebratory items by Monday, January 12, 2015* to help us make this a year to remember!

Thank you for a great three years and May the Force Be With You!