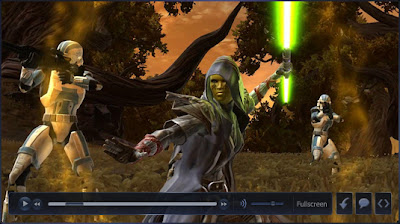 In this weeks Friday Update, Bioware highlight the character progression of the Jedi Consular with a new video. Will you choose to don the dark, stealthy robes of the Shadow; or take the lighter path of the Sage?

As your character grows more powerful, you will see them gain new skills and abilities to complement the superior gear they acquire.

Channeling the power of the Force to give them strength in combat and clarity in diplomacy, Jedi Consulars are respected for their leadership on the battlefield as well as their evenhanded demeanor at the negotiating table. While many devote themselves to uncovering the ancient secrets of the Jedi and use their command of the Force to defend and protect their allies, others use the Force as a means of slipping into the shadows and becoming powerful servants for the Republic.

Watch just a few of the many ways the Jedi Consular can progress through their journey in Star Wars™: The Old Republic™, and let us know what you think on our Forums.