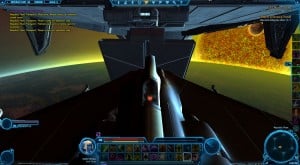 I was very excited when I saw that Power Cords had issued a new review of SWTOR.  I simply cannot get enough reviews of this game to see how other people feel about a game that I have simply fallen in love with.

Evan Reedy is a new reviewer and they had this to say about him, “We brought you a review of SWTOR a few months ago, but we had yet to really experience much of the end game content. Well, now we’re making up for that. Our newest writer, Evan Reedy, has his review on the end game content of SWTOR.”  Pwcords.com

It is always nice to see that these websites take the time to go back and update reviews that have been lacking.  One issue that was found with the game comes after level 50, Evan states,

“Once you reach the maximum level of 50, you kind of run out of things to do. You can always go back and complete all the quests you missed; you can run daily quests…”

I tend to agree with this statement as there is not much else to do other than leveling up.  It would be nice if there was more exciting action when you become this high of a character and hopefully SWTOR is working on this.  Another issue Evan had was with the water feature, “But none of this has delved beyond the surface of the water (which coincidentally neither can you, in SWTOR you can’t swim)”

Why offer a water feature that cannot be utilized by characters?  Of course there is always raiding that can be done at this high of a level but it can become tedious.  Again Evan delves a bit deeper with this statement:

“Now, I enjoy raiding very much. It’s one of my favorite aspects of any MMO. That being said, no game has it perfect and especially not a game that’s release date was just 4 months ago. In the beginning, more so than with later patches and expansions, each game has some bugs that hinder, or completely halt gameplay until it’s fixed and Star Wars is no exception”

I really enjoyed his insight into the game and look forward to reading more of his reviews. Read more at Pwcords.com.